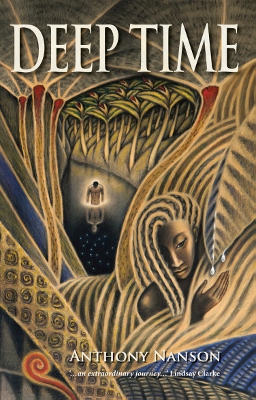 Deep Time tells the story of an African expedition lead by cryptzoologist Brendan Merlie who is hoping to find some evidence that certain extinct species might still be living deep in the jungle.

You may think this sounds like a fairly standard adventure story (and indeed, the Anthony says in the author’s notes that he was inspired by the classic adventure novels) but it’s so much more than that. This book covers environmentalism, religion, science, morality, sexuality, ancient history and so much more (without it ever seeming forced).

It was Brendan and Salome that I was the most fond of, however. Brendan is a scientist and often hides behind a slight degree of rational detatchment to protect himself, but he certainly doesn’t lack emotion and it’s clear that many things affect him to a large extent. He always tries to be pleasant and upbeat, even in the face of disaster, and I think this makes him hugely likeabe.

Salome, meanwhile, is quite different to Brendan and is frustrated by the ordered nature of science. She’s very much a free spirit, but with strong moral convictions and I always loved to see her standing up for the things she believed in. At times, I felt like she was a little mean to the other characters, but then there are so many terrible things that happen to her throughout the duration of the novel, that she can be forgiven for occasionally seeming short tempered.

One thing about Deep Time and something which might put some people off, is that there is quite a lot of sex and violence in it. These are things I don’t usually enjoy in fiction, because I tend to find them used in tasteless ways that feel a bit on the nose. In Deep Time, every act of violence and every instance of sexual interaction felt perfectly natural. The sex and violence really complimented the story because, in a way, Deep Time provides a critique of human nature, and are not sex and violence large parts of human nature? Something else I really appreciated was that there was a lot of nudity in it, but that there was a strong emphasis on nudity as a non-sexual thing, which is a perspective I have a great deal of respect for, but which I don’t encounter too often.

I could go on for a long time about why this is an absolutely superb book, but I’ll wrap it up now to avoid this review becoming too long. Deep Time is a fantastic sci-fi adventure novel, wrapped in lots of scientific language which helps makes the unbelieveabe believeable, while also telling a deeply emotional story. At times you’ll laugh at lighthearted interactions between characters and at times you’ll find things utterly heartbreaking. It’s definitely worth a read and I hope it will be remembered for years to come and that Brendan and Salome will enter the pantheon of great literary characters.