Doctor Who: Remembrance of the Daleks by Ben Aaronovitch 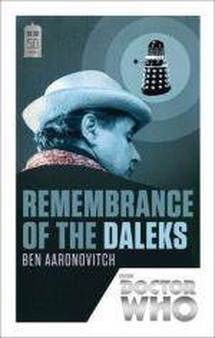 This is a novelisation of the Seventh Doctor’s television adventure: Remembrance Of The Daleks. Unlike books that go on to have film adaptations, I would suggest that you read this after having watched the story first. The four part adventure will give you everything as it was originally intended to be enjoyed and then reading it afterward will flesh out the story quite a bit.

The story follows the Doctor and Ace as the head to 1963 England so that the Doctor can tend to some unfinished business. Things aren’t so simple though as two separate squads of Daleks are sneaking around behind the scenes and preparing to take action. I won’t speak too much about the plot though, there are some exciting twists and turns (that I’d hate to spoil) but I’d also like to talk a bit about how it differs from the TV story and why I think it actually compliments it rather well.

But while it is certainly worthy of very high praise, I must admit there is one downside. The start of the story seems very rushed, there’s very little set-up and then all of a sudden the characters are just casually in a very tense situation which was far too fast for me. Thankfully, after a short while, it begins to balance out again.

One definite plus is the fact that virtually every single character is much more developed than they were on the television so you’ll find yourself caring about them much more. There’re are also several scenes which are not directly linked to the plot, but which add quite a lot to it, which are nowhere to be found in the television version: there’s a lovely couple of pages with the First Doctor at the start, a couple of flashbacks to Ancient Gallifrey featuring Rassilon, Omega and introducing a mysterious character referred to only as ‘the other’ who is very interesting and expanded on significantly in other pieces in the expanded universe (specifically, in the “New Adventures” line.)

Definitely worth a read, even if you’ve seen the episode already. Rating: 8.4/10

(Sorry for not posting anything on Wednesday, I did plan to but I didn’t get around to it since it was Christmas day.)