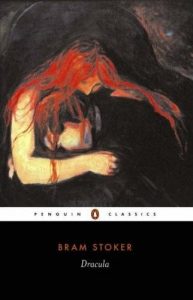 I think that Dracula, despite its somewhat archaic use of language, creates a rather dark and creepy atmosphere for its story rather well. Roughly the first third of this book is really excellent, Jonathan Harker has to go and visit Count Dracula in his castle in order for them to negotiate the sale of some real estate (or something along these lines) and this whole section (written as if it were Jonathan’s journal) is very well written. Any reader today will know that Dracula is secretly a vampire, but the way that Jonathan slowly figures it out through all the weird things that Dracula does is very suspenseful. Age, and the fact that the idea of Dracula has become somewhat cliched, has done nothing to reduce the quality of this story’s opening.

The story does become slightly less enjoyable after the action moves from Dracula’s castle to London, but it is still very good. The immediate threat is lost as Dracula kind of steps into the shadows. To elaborate, I mean a body is found and it is said that Dracula is responsible, but at the start Jonathan actually has to live with Dracula so he seems much more menacing.

I hope I have written this review in a way that explains how I feel about the book without spoiling the storyline for those who aren’t aware of it. I’ll also add a little note which is specifically about the edition I read, the introduction insists that there is a lot of repressed sexual tension of the Victorian times which is subtly released in this book, something I have to disagree with. I saw nothing overtly sexual in this book apart from one very minor scene.

Hopefully this has been interesting for you, on the whole I’d rate this book as a 9/10, just like it’s sequel. If the whole thing had been of the same quality as the first third it would have gotten a 10/10 but unfortunately it was not.