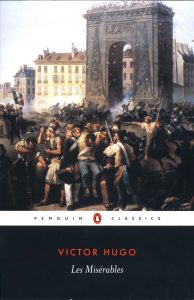 A lot of people might be put off of reading Les Misérables due to two things: the fact that it’s from the 19th century and the fact that it is one of the longest novels ever written. But I implore you: give it a chance! I’ll admit, it could be shorter, but reading it was such a moving, emotive experience (quite unlike anything else I’ve read) and I think there’s a lot to be gotten out of reading it.

For me, this was a “bus stop book.” What I mean by this, is that I would read it for ten minutes each day while I waited for the bus. Shamefully, this meant that it took me three years to read. However, I should point out, that from about the second half onward, I had grown so attached to the novel and it’s characters that I found myself reading it outside of allotted bus stop times quite often, simply because I couldn’t help myself.

So what exactly is the story? Well, it’s difficult to say much without spoiling it. There are a lot of surprises and unexpected developments which would not have been quite so effective had I known they were coming. All I’ll say is this: the story follows a man named Jean Valjean and the lives of the people he meets. Jean Valjean is a criminal and let’s just say that he experiences some inner conflict about his way of life.

The story covers about twenty-years and in that time, Jean Valjean’s life changes a lot. Understandably, this means there’s a large cast of characters, including children who grow up to be adults within that time. The fact that the novel itself is so long really helps to emphasise the passing of time and when it came to the end, it felt like the end of an era. I just sat, lost in my thoughts, for some time after I read the last page. In some ways, I wanted it never to end.

Having said that, one of the reasons that this book is so long, is that Hugo will often go off on tangents. Now, when I say “tangents” I don’t mean parts of the story that aren’t so relevant to the overall plot, but essays on moral philosophy, theology, history or whatever else he feels like talking about. Some of them are very interesting and often show that Victor Hugo was nice and progressive for his time. One of them even ends up tying the events back to his own, real life, which I found very meta.  But while some are very interesting, one, for example, is about the history of sewer systems. Yeah. They’re hit or miss.

Another of the novel’s flaws is its female characters. One of them, Éponine, is quite interesting and has a good story arc. Pretty much all of the rest of them, however, remain very underdeveloped. They may be important to Jean Valjean, but we never get to know what they’re like or what they’re thinking because the story is never really told from their perspective. It’s complicated in that, for its time, I think he was doing a good, progressive job, but there are still some attitudes which come across in the book and are rather uncomfortable by today’s standards.

But, despite it’s flaws, this was one of the best books I’ve read in a while. I love the perspective that it gives us of the world – one where the suffering of one child is of the same level of significance and importance as the wars waged on the global stage. It was full of interesting characters; Javert, Bishop Myriel and Gavroche to name but a few. Most of all though, it was Jean Valjean who had the biggest impact on me and he’s a character who I shall carry in my heart forevermore.