So Long, and Thanks for All the Fish by Douglas Adams 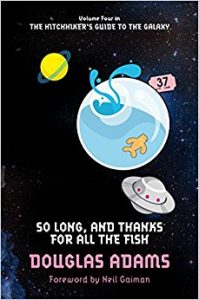 So Long, and Thanks for All the Fish is the fourth book (review of the third) in Douglas Adams’ The Hitchhiker’s Guide to the Galaxy series and is actually my personal favourite. It’s very different to the previous three instalments in that I feel it has a greater level of emotional depth and is definitely much more grounded in reality.  As much as I love the other books,I think this one is just a little better.

The story follows Arthur’s return to Earth, which is strange, because the Earth was destroyed in the first book. He doesn’t quite understand how or why the Earth has returned, but he is overjoyed by the fact. Although, of course, having experienced all of the strange things that happened to him in the other books, it was obviously going to be hard for him to readjust to normal life.

Nobody seems to be at all aware of the Earth’s destruction, which causes Arthur to question his sanity to some degree. He meets a woman named Fenchurch who has also has some reason to question her sanity. Between the two, a romance begins to blossom. Now, I’m not the biggest fan of romance in books (because I feel like it’s often done badly) but I really appreciate the story of Arthur and Fenchurch. It felt quite natural at times and I really felt the emotions. It was lovely.

But if that sounds too different to you, rest assured that there’s a nice sub-plot about Ford Prefect off on some alien world too. Ford is as funny as ever and he also discovers that the Earth has been spontaneously restored.

I guess some people might be disappointed by the change of pace for this book, but to me it felt like a breath of fresh air. It was a shame that Zaphod and Trillian didn’t appear, but I liked the fact that Arthur was given more development and Fenchurch was a great new character as well, so it balances out. Plus, it can still be just as weird and just as clever and funny as the previous books – it just has an Earth-based setting, rather than an outer space setting.

So that’s the fourth Hitchhiker’s Guide to the Galaxy book and my personal favourite. Having such a unique tone helps to give it a strong identity and stops it from just feeling like a part of a series. Plus, I feel like this different approach helps to add more integrity and variety to the world which has been built up throughout the series.

It’s a really great addition to the series and an overall favourite book of mine.