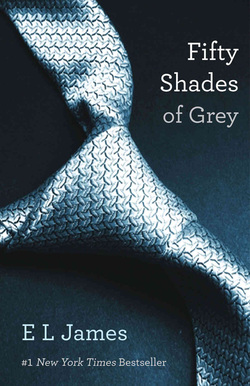 This book isn’t for me…

After about one hundred pages, they start to have sex with one another and, my goodness, I found this very hard to read. Some scenes in particular made me feel downright nauseous, for me, it was horrible. I found myself worrying every time they were alone together that, before long, they’d just be engaging in some explicit activity. On the other hand, if you like that sort of thing, maybe you should view this as an upside.

The only upside, for me, was that there are a few sections of the novel where the two of them are emailing each other, and, in fact, they were quite enjoyable. Ana has more confidence when she emails and so is happier to stand up to him and criticise him, which is good. These email scenes are throughout the book too. Though, sadly, one time she’s criticising him in an email, so he decided to come round for a little bit of rape. Oh dear. It’s not the worst book I ever read, I did still want to find out what happens to the characters (and I wonder if I should read the sequels or not) but this was not good.

(I wrote a fanfiction of the novel called Christian Learns a Lesson, read it here. Unlike my usual writing style, it does contain one instance of bad language.)

(Laci Green made an agreeable video on the novel which I saw shortly after reading it, watch it here.)