The Island of Doctor Moreau by H. G. Wells 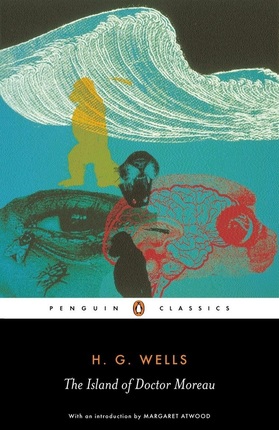 It was his three first novels, The Time Machine, The War of the Worlds and The Island of Doctor Moreau that made H.G. Wells into the successful author he’s remembered as today. However, while those first two are always remembered as pinnacles of science-fiction and have found their way into popular culture, The Island of Doctor Moreau is a little more obscure, which is a shame as it’s equally as good.

The story follows a man named Edward Prendick who, after an accident at sea, is left to stay on an island with the titular Dr. Moreau and Montgomery, his associate. Prendick finds that Moreau has been conducting some strange kind of experiments on animals there: surgically altering their appearance to make them look more human and doing things that will enable them to talk and think.

The Beast Folk (as Moreau’s creations are called) are the most interesting thing about the novel. Other than the clinical horror that surrounds the descriptions of their creation, the idea of them just seems quite disturbing. Though they are animals, they are made to stand upright and act like humans; they’ve been given a sense of human morality which contradicts their natural instincts which causes them a great deal of distress. It feels so wrong (and is also rather sad.)

The story’s rather grim and there’s rarely anything to lighten the mood, which might be off-putting for some people. The narrator’s ability to dismiss clearly sentient life as beneath him just due to certain differences feels a bit like an uncomfortable reflection of the colonial attitudes of the time. Pendrick does generally feel like a character who lacks empathy. Luckily, since this novel is a fairly short read, none of these flaws ever feel especially grating and it remains a rather interesting book with a fast-paced sense of adventure.