The War of the Worlds by H. G. Wells 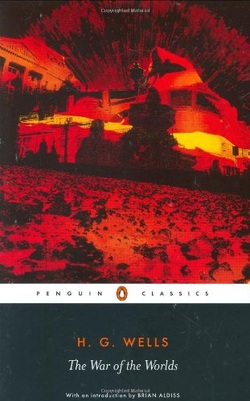 This novel is a very significant one in the history of science fiction. This is the first story about an advanced race of aliens invading the Earth and going to war with the humans, and it’s a pretty good one too!

The story starts when a strange metal thing crashes from the sky and a group of people rush over to investigate. Before long, a Martian tripod is attacking everybody (and various other tripods have appeared across the country) and from then on the story basically follows the journey of the narrator as they try to survive in the hostile environment.

The fact that the main character of the book is not a traditional hero who saves the day (and, indeed, has nothing to do with the resolution) and is merely a regular person caught up in events is one of the appeals of the book for me. I also find that, despite the fact that he narrates it and you know that he is perfectly safe, the threat to his life still seems very high and, in fact, I found myself worrying that he might actually die at one particular point.

The setting of the book is another thing which adds to its appeal. When you think of the standard ‘aliens invade the Earth’ story, you tend to think of it being in the modern day (or, at earliest, the 1950s), but this is set in the late nineteenth century, which makes it feel quite unique (a point which is purely linked to the context in which the novel was written, and not really, any artistic choice).

I also quite liked the general feeling of dread you get throughout. There is one particularly memorable part, where he explores a deserted area and the fact that the narrator is entirely alone made it all seem quite eerie. It’s quite a depressing book, because the Martians always seem so much more powerful than the humans, and you’ll find yourself wondering how things could possibly turn out well. This depressing tone added a lot to my enjoyment of the book.

On the whole, this is a timeless science fiction adventure with a solid story. Rating: 8/10