(This week on my blog I am posting an entry every day, and each entry will be written by somebody other than me. Today’s entry is written by somebody I can’t write the name of, so I shall call him Rhino Water. He has a very large number of video game related countdowns and this is one of his favourites. Also, just a quick warning, there are spoilers in ths countdown. Enjoy!) 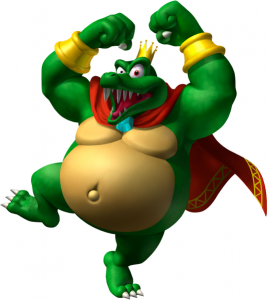 I hate King K. Rool, he is so annoying. All he does in Donkey Kong: Jungle Climber is laugh, talk and have an annoying final battle. His design is bad too, I mean, it looks like he was drawn by a ten year old. Also, he steals crystal bananas, isn’t that more the kind of thing Donkey Kong would do? Lastly, his name. What is the ‘Rool’ about?  King K. Rool. Fair enough with the K, but Rool? Really? Sorry but Rool is a stupid name. But he is not as bad as the next villains…

Number 9 is, a Crash Bandicoot villain, (no it is NOT Dr. Cortex): The one and only Emperor Velo XXVII. 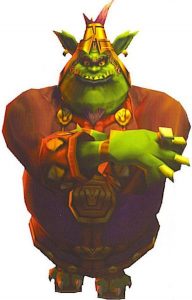 Yes, him. He is in Crash Nitro Kart. I love the game, but the villain sort of ruined it. First he gets the bandicoots, Dr. Cortex, N. Gin  and Tiny just to race. I mean, why them?  Can’t he pick Sonic? He’s fast. And another thing, he could use his own species to race instead of going all the way to another planet to get people to do that for him. Also he is mean to his four friends when they lose. Lastly, he is a sore loser, when you beat him he says go home, but then says he will destroy the planet because you’re refusing to race, but he said they could go home if they beat him… But noooo, they have to get the relics then beat him again. ANNOYING. But who is a worse villain than him? 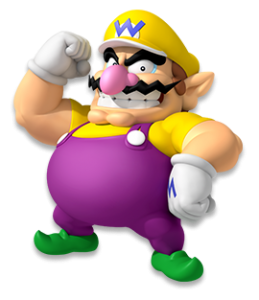 I mean, he does not act as a villain. He helps Mario in Super Mario 64 DS. He is supposed to beat Mario, not help him! And all he does is steal money… Wow. Also, he is stupid. In Wario Ware: Smooth Moves, all he does is steal a Wii Remote and then just puts it back at the end. Yeah. He is a stupid villain. 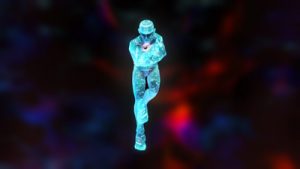 Okay, his theme and battle were cool, but everything else was awful… First his design, what’s that, with a full leg and a half leg? Secondly, how can he beat all the Nintendo characters (and Snake) in one go, but not Sonic? WHAT? It just made the Nintendo characters look bad. I mean couldn’t Yoshi use his speed? Or Pit and Link use their arrows? Or Fox use his gun? Lastly, why is he a villain and what is Tabuu? We don’t know what he is, where he came from or even his back story. But he did not get higher because of his cool battle and theme, just everything else was bad.

Number 6 is Baron Dante from Croc. 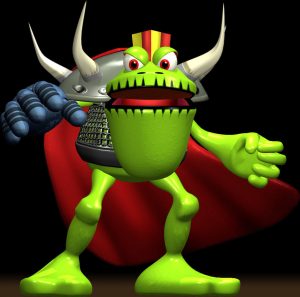 I mean, really, he looks like King K. Rool’s brother. Also, he is a bully because he picks on the little hair ball creatures for no reason which left Croc all alone. He’s also a coward, he gets animals to get rid of Croc for him. Really. When you finally battle him it takes forever and when you beat him, guess what? The final battle it just him as a ghost, but very easy. I only played the first game, not the second one, but he is so annoying though. He’s just missed the top five…

Number 5 is, a Sonic villain, Merlina (from Sonic and The Black Knight.)

I mean, the game had weird story, like who could be the villain? First it was the black knight, then Amy for giving him the power, then Merlina’s granddad for creating him and then it was Merlina. Now, let’s see, when she becomes the villain, she looks stupid and then she could have won when battling Sonic: She summoned Sonic  when she could have desummoned him and send him back, then she’d have won. Lastly, her battle is so annoying, it took me lots of tries to do it and the monster looks like Tabuu’s father.  When you defeat her she is happy at the end and everyone is…

Number 4 is, a Pokémon villain, Ghetsis. 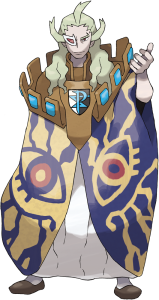 He is the one bad Pokémon villain. The others, they’re awesome. But back to Ghetsis, I mean, he walks left and right when he is just talking to you, I am saying, time waster! Also, he makes Team Plasma bad by saying we shall save Pokémon from humans when at the end was that only he can have Pokémon and no one else, and all to take over the world. He’s bad to his son and insults him, and he cheats in his battle with one Pokémon. When you beat him he says “I am invincible” (well, something like that). Stupid. But he is only number four… 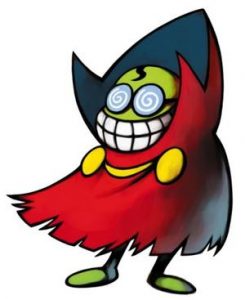 One word to describe him: annoying. He is the most annoying character EVER! There is one good thing about him: his theme. That’s all. He looks like a yellow blob with glasses and also he makes Bowser look like an idiot; he turned his castle in to a theatre. What? He brain washes his minions too. Also, his annoying voice and he repeats some lines over and over again. His battle is very annoying. Grrr, I hate him! But who can be worse? 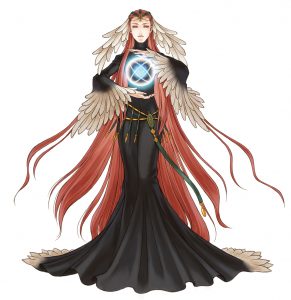 I mean really, her final battle is not fun. She needs to have a hobby, I mean, all she thinks about is war. She also turns everyone except the Fire Emblem characters into statues. I mean, if she had turned Ike in to a statue she could have won. Also, her voice is stupid, and what’s the point in falling asleep? Okay, Yune falls asleep but she could have kept her awake. But what can be worse than her?

Number 1 is The Dark Master. 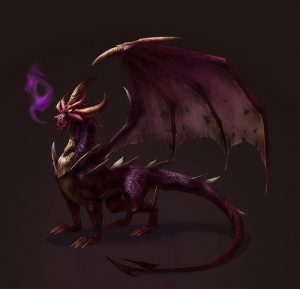 Man, I can’t stand him! He is from Spyro. Now, first thing, he is hateable and his voice is rubbish. In fact he has one thing in common with each of the other villains.
Let’s start with King K. Rool: both have stupid names:
Velo: Both sore losers.
Wario: Both stupid.
Tabuu: We know nothing about their backstories.
Baron Dante: Both bullies and cowards.
Merlina: Both could have won.
Ghetsis: Both selfish.
Fawful: Both annoying.
Ashera: Both need to think of something else.

The Dark Master has all of them, and he made the Spyro series go downhill, which is sad because I really liked Spyro until The Dark Master showed up. So, he’s not just the worst villain, he also made Spyro bad. I really hate him, and that’s the end of my countdown.

This entry was posted in Countdowns, Guest Posts, Video Games. Bookmark the permalink.