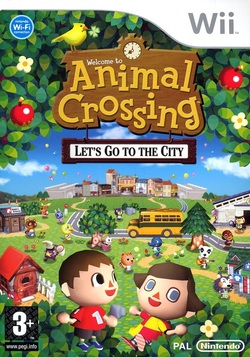 I absolutely loved the first two Animal Crossing games and so it should be no surprise that I got myself pretty excited for the third game which was due for release on the Wii. I got the game and I enjoyed it, but, honestly, I have to say it was a bit of a disappointment. But does that mean it was bad? No.

You see, I loved the first game and then the second game felt like a unique experience which expanded on the first in exciting new ways… The third game, Let’s Go to the City, just felt like it was the second game, Wild World, again with only a few minor changes.

This game still has everything I love about the series: a real time day and night system, seasons that pass along with the seasons of reality, fish and bugs to catch and donate to a museum, loads of furniture to collect, loads of villagers to interact with, secrets to be found, holidays to be celebrated and so forth, but it’s not really been added to in any meaningful way.

The main new feature is the game’s city. Despite being called a city, which would suggest to me a very large area, it’s actually just a very small place with only a small handful of shops. As it takes a long bus ride and loading time to get there, I didn’t go too often. Other new features include voice chat when online (all online features are now discontinued), the ability to play as your Mii with Mii Masks, the ability to change the colour of your shoes, a few new holidays, new characters and new furniture but… That’s it and the new features didn’t feel very substantial.

So, for the first time, I don’t think I am in a position to fairly score this game. I can imagine that had I played it before I played any of the other Animal Crossing games, I’d have thought it was amazing, but I played it after having poured hundreds of hours into both of the two games that came before it and when I started Let’s Go to the City things just felt a bit stale. I think it’s important to keep this in mind before you play the game. For the sake of consistency, I will score the game, but I found it especially hard to do so.