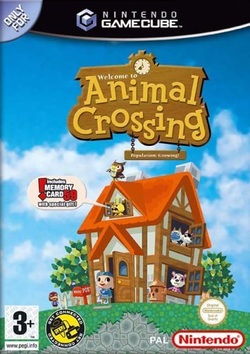 (While there were a few previous instalments in Japan for the Nintendo 64 and the Gamecube, I don’t think that I’m ever likely to get a chance to play any of them so, for this review, I will be treating this as the first game in the series.)

I’ll start by giving you a very short, but accurate description of what this game does: Animal Crossing gives you a new life. If you want a game that has clear goals. levels and bosses to work your way through, this is certainly not the game for you.

The game starts with your character riding on a train on their way to their new home. A cat named Rover comes over and starts chatting to you, asking your name, sex, and the name of the town you’re headed for. Once you write them all in they stick with you for the rest of the game. Before long the train pulls up at the train station and then shortly after you make a down payment on your new house. For a while you work for the local shop keeper, Tom Nook, to pay off some of your debt, once you’re done working for him, your debt won’t be paid off, but you’re free to do as you please.

You can get yourself a fishing rod and try and catch every type of fish, which you can then keep in your house, sell to Tom Nook, or donate to the local museum. You can also get yourself a bug catching net and catch every kind of insect, which you can use in just the same way as the fish. It will take a long time to get them all though, because they don’t appear all year round due to the fact that the game follows the real life seasons. Plus you could also buy a shovel and find buried treasure, such as dinosaur bones and mysterious Gyroid statues.  Another nice feature is that you can head to the Able Sisters’ shop and design yourself a unique outfit to wear. Tom Nook also has a fresh set of items available in his shop every day, all of which can be purchased and then used to decorate your house. Speaking of your house, once you’ve paid off your initial debt, you can then have your house expanded to fit more into it… Though that will put you back in debt. There are lots of rare items to find too, which, amongst other things, include playable NES games such as Balloon Fight and Donkey Kong Jr. Math.

The world is also full of various memorable characters. As well as those I’ve already mentioned, there’s always a large number of people (or, in this case, talking animals) who live in your town. There are literally hundreds of different villagers you can have living in your town (but not all at once) and you can speak to them to get to know them, help them with problems, or, if you really want, just bash them with a bug catching net and push them around. There are also travellers who visit your town from time to time, such as K. K. Slider, the musician who plays outside the train station on Saturday nights, Crazy Redd, who runs the black market and Joan the turnip seller (who can help you to earn a lot of money). Plus, if you play on specific days, things will be happening in the game, such as Jingle the reindeer visiting on Christmas Eve and the mysteriously pumpkin headed Jack who visits on Halloween.

In conclusion, this an excellent game which is full of content and which can be played at your own pace. There’s so much to do and I feel bad for missing things out, but to tell you everything would take far too long. I heavily suggest you try this game and have fun living the luxurious life of an Animal Crossing villager.