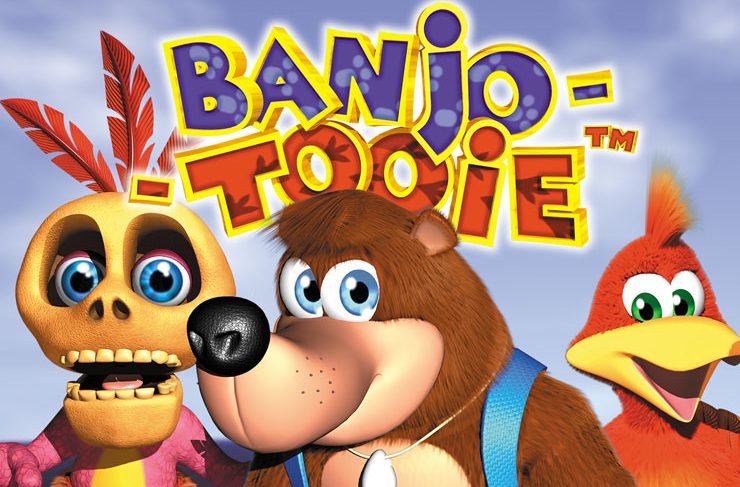 This is the second Banjo-Kazooie game (here is a link to a review of the first). It takes place two years after the first and starts with Gruntilda’s sisters Mingella and Blobbelda coming along and using magic to rescue her from underneath the boulder she’d been trapped under since the ending of the last game. Gruntilda (now a mere skeleton) destroys Banjo’s house, kills Bottles, wrecks Spiral Mountain, and then heads off with her sisters. Gruntilda heads to a giant tower where there is a big gun which she plans to use to suck the lifeforce out of people so that she can use it to grow her body back properly. Banjo then sets out across the Isle O’ Hags to get to Gruntilda so he can stop her and her sisters.

The biggest difference between this game and the first, is that the first is a very happy game, whereas this one can be a lot darker at times. I mean, I’ve already mentioned that Bottles is killed right at the start (though his ghost hangs around), one side-quest involves you having to KILL two innocent non-playable characters (and this has to be done if you want 100%!), you meet a perfectly nice happy person who is shortly afterwards transformed into a zombie which tries to attack you, you find the ruins of a house and read about how the whole family was killed when their home was destroyed, and lots of other things like that. None of it is taken too seriously though. It’s also quite different aesthetically too, there aren’t as many colourful ‘happy’ worlds anymore: now you’re going through places like an enormous toxic factory, an abandoned amusement park or an old mine.

The different places to visit are one of the other biggest changes in this game when compared to the first. Whereas in the first game you go through Grunty’s castle and find doorways which are basically portals to completely unconnected areas, the Isle of Hags feels like one big world, rather than lots of smaller worlds connected by a hub. In this game, you might meet somebody in one world, and then do something for them which then prompts them to go somewhere else and then you’ll later find them in a different world. There’re even physical connections between the worlds (such as going down a corridor in one world, and finding yourself in another) and even a train service between them! Tasks to complete are often much more complex too and you need to think hard about how to solve certain problems. It’s a lot harder than the first game.

Gameplay-wise, though, things are mostly unchanged from the first game, the only difference being that you slowly learn additional moves not seen in the first as the game goes along. You can also occasionally play as Mumbo now, which adds some nice, but minor (since he can’t do much), variety. One interesting thing, though, is that there are now first person shooter style areas. There aren’t many of them but there inclusion brings a fresh new way of playing to the game, and there’s even a very fun multiplayer shooting mode (and also several mini-games you can do on multiplayer, which are quite nice too).