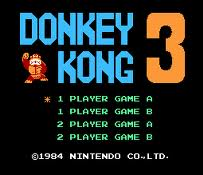 Donkey Kong 3 is probably one of the lesser known titles in the Donkey Kong series and the third of the arcade games. Donkey Kong was the first, where Donkey Kong kidnaps Mario’s girlfriend Pauline and he has to rescue her, then came Donkey Kong Jr. where Mario kidnapped Donkey Kong as revenge and his son Donkey Kong Jr. had to go and rescue him, this is the third instalment in the Mario/Donkey Kong conflict. The story for this is a little odd actually; we are introduced to Stanley the Bugman a previously unseen relative of Mario’s. Stanley owns a large greenhouse full of plants, and Donkey Kong has decided to invade it along with an army of insects.

In this game, you play as Stanley as he tries to drive Donkey Kong out of his greenhouse. The gameplay is very different to what you might expect, instead of running though levels or jumping over obstacles, you have to shoot Donkey Kong (who’s hanging by vines) and the insects with a bug spray gun. It’s loosely similar to the gameplay of Space Invaders, but the enemies in this game are far more agile.

The game may be a fun way to spend half an hour or so if you get bored, but I can’t imagine it being played for any extended period of time. There are only three levels and after you finish the last one (and defeat Donkey Kong) it just loops back to the first and you play it again. The main appeal seems to be trying to get the highest score you can. Unfortunately, I think the game is a little too hard and while you’ll probably finish the story, you won’t get a very high score. There’s also a multiplayer mode where you both take it in turns to do the exact same thing, it’s not that great. That’s all there is to the game.

On the whole, I’d say curiosity may make Mario or Donkey Kong fans buy the game, but it doesn’t have that much appeal so I would rate it as 5.7/10