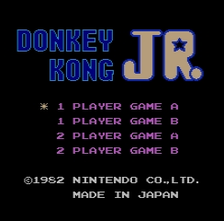 Everyone knows the original Donkey Kong, but its sequel Donkey Kong Jr. is perhaps a little more obscure. Nonetheless, this is an interesting piece of Nintendo history, featuring the debut appearance of the eponymous Donkey Kong Jr. and a very rare villainous depiction of Mario.

The game is a direct sequel to the original Donkey Kong and is Mario’s revenge against Donkey Kong for his earlier kidnapping of Pauline. Mario locks Donkey Kong away in a tiny little cage and Donkey Kong Jr. goes through four different levels in order to rescue his father. It’s very short, but, you can go through it again and again in order to get high scores (in both a normal and a hard mode) and there’s also a two-player mode where you take it in turns with somebody else to go through the levels.

It’s a nice enough little game but there’s not much to it and it does have its downsides. Donkey Kong Jr. moves really sluggishly and dies really easily. Of course, touching enemies will hurt you, as with many games, but falling really short distances also kills you and often you’ll jump a distance that seems perfectly fine only to be annoyed when he dies. On the subject of jumping, it feels like he’s really bad at it too, he barely leaves the ground. I think he probably has the exact same level of mobility as Mario did in the first game, but for some reason it feels much worse for Donkey Kong Jr. perhaps because he’s bigger. Sadly, having the only playable character be so cumbersome has the knock on effect of making the whole game feel rather slow, which is a shame.

So, it’s nice to play the game and know that it (much more than the first Donkey Kong) is the seed from which the spectacular Donkey Kong Country series later grew, but as it is, this is nothing more than a curiosity for the fans.

Buy it as part of the compilation Donkey Kong Classics here.