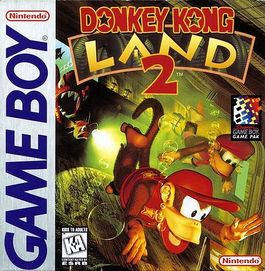 Back when the original Donkey Kong Country trilogy was being released for the SNES, there were a series of side games (the Donkey Kong Land trilogy) which were released as handheld counterparts. The Land games took the same general premise as their Country brothers and sisters, but changed things up and did them slightly differently.

What’s sad about this game especially is that a lot of people think it is literally just a watered down port of Donkey Kong Country 2: Diddy’s Kong Quest. But that’s plain wrong. Every single level in this game is unique, and if you played the SNES game, you are likely to enjoy this too. It’s some solid 2D platforming fun, with levels that look lovely even in monochromatic 8-bit.

What is disappointing about this game is that, while Donkey Kong Country 2 has one of the most beautiful soundtracks in gaming history, Donkey Kong Land 2‘s is a little underwhelming. Being toned down to 8-bit sound does reduce some of the quality, but even like this, it still sounds very nice. The real problem comes from the fact that the number of songs is greatly reduced and certain songs get repeated a lot, which is a real shame.

I also think this game is, perhaps, a little too easy. I didn’t really get stuck on any of the levels, and when combing through them to find all the secrets after beating the final boss, I didn’t really have any trouble either. This reduced level of difficulty also means that you will probably get through the game pretty quickly.

Nonetheless, I don’t want to give a negative impression! Donkey Kong Land 2 is very good because it is similar to Donkey Kong Country 2 which is one of my favourite games. The gameplay is fun and it’s another adventure for Diddy and Dixie Kong. It falls short in one or two areas, but is generally great fun.