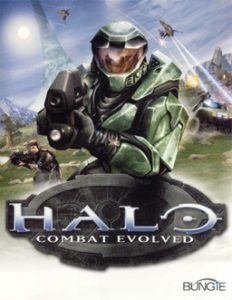 To be quite honest, I don’t play very many first person shooter games. I guess it’s just not a genre which appeals to me in the same way that RPGs, platformers, life sims and other genres too. In fact, Halo: Combat Evolved might be the first FPS game I’ve ever reviewed on here. But since this was such a popular game and supposed to be one of the very best in its genre, I wanted to give it a try.

So what did I think? Well, actually, I was quite impressed. The game has you playing as a character called Master Chief as he fights in an inter-planetary war. Things do take quite an unexpected turn and though the story is a little too complicated, it does a good job of setting up for some high quality gameplay.

Master Chief (with the help of his AI companion, Cortana) has to fight his way through a race known as the Covenant (and later, “the Flood”) and this battle takes him through lots of different locations. You’ll find yourself fighting your way through space ships that are under attack. Sneaking around snowy wilderness. Having shoot outs in dark jungles and abandoned military bases.

Some of the area in the game are actually quite creepy and I appreciated how atmospheric it could be. In fact, the Halo games drew a lot of inspiration from fellow sci-fi franchise Alien. There are a lot of little references to the first Alien film and scenes which mirror moments from it – if you’re an Alien fan, you’re likely to like this game even more.

In terms of gameplay, I felt like the controls worked really well. I didn’t have any issue with the general combat. The vehicles, perhaps, took a little bit of getting used to, but they weren’t too bad. Generally though, I can’t fault it and that does a lot to contribute to my overall appreciation of the game.

The game has two major flaws, in my opinion. The first is that some of the research centre and space station levels are extremely monotonous. It felt like some rooms were just copy and pasted but with no enemy locations. Not only did they lack variety, but they also were far too long. I usually don’t like really long levels that are really interesting, let alone really long levels that are not.

But, still, most of the game’s levels were good fun and the game, on the whole, provided a solid experience for me. There’s also a multiplayer mode for people who enjoy having death matches with their friends.