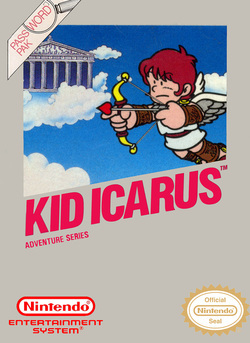 Until recently, this had been one of Nintendo’s more overlooked games. I think the reason that this game became slightly obscure is the fact that, in a way, it is rather weird. The gameplay is a little like a mixture between The Legend of Zelda and Metroid and features many scrolling 2D platforming levels, except, instead of scrolling left or right, you always have to go upward (which can be incredibly annoying, because you can never go down, to go lower than the screen, even if there is land there, will kill you), so it’s certainly very unique.

Story-wise, while it’s all very clearly based on Greek mythology, it pretty much does its own thing. You play as a young angel named Pit who is trapped in the Underworld. As Pit, you need to escape the Underworld and then go on to save Angel Land from the rule of the evil Medusa. It’s the kind of basic story that you’d expect from a NES game.

What’s especially strange about this game is the difficulty. There are four worlds, and the first two are so much harder than the later two. As you progress through the game, you collect things which make Pit more powerful, the problem is, that without these things he’s really rather weak, making it disproportionately hard to begin with. Also, even when powered-up, Pit’s really slow. This can be pretty irritating when you have enemies which quickly move all around the screen and harm you on contact and especially bad when, at the start, Pit can’t take much damage before he dies and you have to start all over again. There are also enemies which, with no warning, will steal your power ups meaning that an encounter with them can be worse than anything else.

On the whole, it’s worth a try as it’s an interesting part of Nintendo’s past. It can be quite fun, especially if you have a version with save states and it’s nice to get to know Pit since his revival in 2012. The graphics may not be fantastic (I hate black skies), but they’re not bad for their time. There’s an interesting selection of unique enemies (even if some of them are infuriating) and one of them even provides a lovely little connection to Metroid.