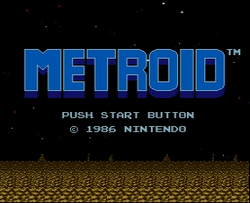 This game, the one that started off the popular Metroid series, is very hard indeed. In my opinion, it lessens the experience of a game if I use a game guide to get through it, however, for this game I did use some additional materials on the internet to aid me and I find the experience was actually improved. I’ll explain why as I go on.

Samus Aran is a bounty hunter who has been sent to the planet Zebeth (called Zebes in later games) in order to eradicate the Space Pirates and the Metroids they have been using. At the start of the game, Samus arrives in a huge underground labyrinth/base and you basically have to just make it up from there. There are no limitations on where you go. You can explore the whole place as you please. I find it quite impressive that all of that was achieved with an early 2D side-scrolling game like this. On the one hand, it’s nice to have this level of freedom because it means that you could play through it several times and do it differently each go. On the other hand, the world’s so big it’s easy to get lost and sometimes it can almost feel like you’re wandering aimlessly. I tried a three times to play through the game without any aid, and I got lost and bored every time, on the fourth attempt I found a map of Zebeth on the internet which made it so much more fun. I found that it gave me much more direction when playing and stopped me from getting lost, but at the same time using a map didn’t guide me too much, so I still felt proud of myself when I did something hard.

Another slight downside, which was likely due to limitations at the time of creation, is the fact that if you save using the game’s password system, whenever you next play your health gauge is almost entirely empty and so you’ll have to spend ages going in and out of a room and killing the same enemies in it over and over again in the hope that they will drop some health. This makes the save states available in the 3DS and Wii U versions of the game extremely handy, because you can stop playing with full health and then resume with that full health next time you start (I can’t imagine how frustrating the final boss must be without that).

Having said all of that, I certainly don’t mean to leave a negative impression of Metroid because I had a lot of fun while playing. With or without a map, it can be quite satisfying to uncover a well hidden secret and the whole game has such a wonderful atmosphere to it. Perhaps it’s because of the soundtrack, or because nobody but Samus seems to be an intelligent life from, but you really get the feeling of being isolated on a distant planet. Plus, while it may be taken for granted today, I love the ending twist that Samus is female. It’s a lovely way of subverting gender roles/expectations.