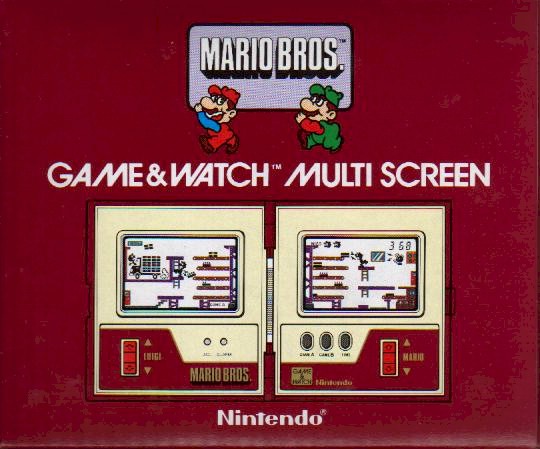 When most people think of a game entitled “Mario Bros.” they probably think of the popular arcade game, but this Game & Watch was actually the first game to bare that title. Not only is this one of the Game & Watches which I had the most fun with, but it’s also the game that introduced us to Mario’s brother, Luigi. While at this point Luigi was nothing but an identical copy to Mario who wore green (and, in-game, that’s all black) he would in time grow to be one of the most loveable characters in the Super Mario franchise and it’s very interesting to look back at his origin. It’s also the first time that Mario really “spun off” from the Donkey Kong series, as there are no ties to those games other than Mario himself.

Anyway, the game itself has Mario and Luigi working in a factory where they must put boxes onto conveyor belts where things are added to them. The game takes place across two screens, but unlike other dual screened Game & Watches, this one is held so that the screens are side by side (rather than one on top of the other.) The left screen has Luigi on it and the right screen has Mario on it and you control each of them independently. Boxes appear at the bottom right, Mario has to catch them and put them onto the first conveyor belt, which brings them over to Luigi who has to pass them onto the second conveyor belt, which is above the first and then comes back to Mario. You pass them up through several conveyor belts until they get to the top and are tossed into a lorry. It’s very simple, but hugely addictive – it’s available with an easier and a harder difficulty level too. Also, like every Game & Watch, you can use it as a watch and an alarm.

This is one of my favourite Game & Watch titles and if you’re only going to try a small number of them, I strongly recommend that this be one of them! I find that some of the Game & Watches are too difficult to get really drawn into, but this one gets the difficulty just right and it’s really quite therapeutic to pass those boxes around for so long. A simple and elegant game.

Buy it here.
Buy it here as part of Game & Watch Gallery 3.