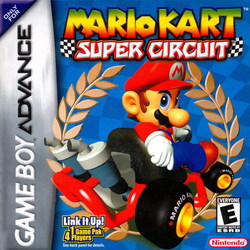 Mario Kart: Super Circuit is the third Mario Kart game and I am quite surprised that it is generally not very highly regarded. Admittedly, it’s not my favourite game in the series, but it’s definitely not the weakest either.

In terms of gameplay and style, it’s kind of like a hybrid between Super Mario Kart and Mario Kart 64; it has all flat levels, as the the first game did, but tries to imitate the art style of the second game. What’s quite exciting about Super Circuit is that it was developed by Intelligent Systems (who do not usually work on the series) and so it has a somewhat unique feel to it. I think what I probably like the most about this game is that it has a rather unusual selection of tracks with things like Cheese Land (a strange world made of cheese and full of mice), Ribbon Road (a land of giant red ribbons and presents) and Sunset Wilds (which is basically an American desert full of Shy Guys). Very nicely, this game’s version of Rainbow Road even features a reference to Paper Mario!

Beyond all that, as a very nice bonus every track from Super Mario Kart is unlockable! So, you might just decide to play this and forego the original entirely. Although, having said that, the track recreations are a little unfaithful in that they use the background from Super Circuit, rather than the backgrounds they originally had. Nonetheless, their return is still a much appreciated addition. With use of the link cable, you are also able do multiplayer with up to four players using only one copy of the game! Other players use different coloured Yoshis, which is quite cool. I also feel like this game controls quite nicely and the difficulty does get to a pretty high level, but it still feels fair, which I can’t say about every Mario Kart.

I guess it is a shame that it doesn’t add any new characters and since the Super Mario Kart tracks returned, it would have been nice to get Koopa Troopa and Donkey Kong Jr. back as well, but it just has the same selection of characters as Mario Kart 64. With its 2D all-flat tracks, I guess it didn’t stand a chance at being the best Mario Kart, but it’s still very fun and definitely worth a try.