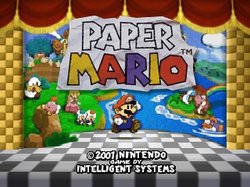 This Mario RPG is certainly very unique. As you may be able to guess from the title, every character in this game is a paper thin cut out. I imagine this decision was made for aesthetic reasons because Mario, Luigi, Bowser and every person and creature in the Mushroom Kingdom looks very nice in this game. In fact, things look rather retro, many characters look like their official artwork for older titles.

The storyline is fairly typical of the Mario series: Bowser kidnaps Princess Peach and Mario heads out to save her, but, thankfully, there are some unique twists this time. Rather than just kidnapping Peach, Bowser steals her whole castle and flies it off into the air, taking several others along with him. Also, Bowser has used an artefact called the Star Rod in order to make himself virtually invincible. Mario loses a fight with him right at the start of the game and then must find all of the Star Spirits in order to have enough power to defeat Bowser.

On his quest, Mario comes across various new and different characters who will help him on his journey. Aside from a short while at the beginning, Mario is followed by a partner at all times. These partners give Mario new abilities when walking around the 3D world (for example a Paratroopa known as Parakarry can fly Mario over gaps he can’t jump over) and also fight by his side in battles, each with their own unique move set. I quite like all of the partners, partly because it’s nice to see some new characters introduced to the Mario series (even if they have been terribly under used since this game). And on the subject of other characters, in this game there’re a few segments where you play as Peach while she’s held captive. Peach sneaks around and gets to do all kind of things, which is a nice change from her usual standing in a cage and doing nothing.

There’s quite a large world in this game too, and it’s one of the few which gives you a wide open Mushroom Kingdom to explore. All of the different locations are similar to places you’ll have seen in other Mario games, such as Dry Dry Ruins, an ancient Egyptian themed place, Mt. Lavalava a vibrant tropical island and the massive haunted house Boo’s Mansion. Every area has its own story to it, there’ll be some problem and Mario has to find out what’s going on so that he knows where he might begin looking for each place’s Star Spirit. This helps to give the game some depth which often feels lacking in the non-RPG Mario titles.

On the whole, this is an excellent addition to the Mario world and the start of a subseries which would later get even better. There’s a lovely mix of RPG, platforming, puzzle solving and good writing which makes this something that should not be missed.