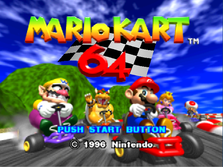 The second game in the Mario Kart series was released on the Nintendo 64, while the first one was on the SNES. As I’m sure you can imagine, this game is quite a lot better than the previous one in a technological sense, but does that necessarily mean it is better on the whole?

The selection of characters is still eight, except this time you can be: Mario, Luigi, Peach, Toad, Yoshi, Wario, Bowser and Donkey Kong. This does introduce Wario and the Donkey Kong Country version of Donkey Kong to the series for the first time, but at the cost of losing Koopa Troopa and Donkey Kong Jr. who were in the last one. I think this roster is just about a step up from that of the first game.

What I find quite disappointing about Mario Kart 64, however, is its selection of tracks. While you would expect this to have more race courses than the first game, there are actually only sixteen, while the last game had twenty. On the upside, every track is very unique and no two look alike, but I feel there’s a certain something lacking about them. While I had a lot of fun with Toad’s Turnpike (which had you racing in a fairly realistic place, alongside regular vehicles), Kalamari Desert (which is a big desert with a train driving through it) and a few others, I found that generally, the courses in this game felt quite big and empty. One upside is that now they are all fully 3D levels, while in the last game they were all flat, but that does leave me wondering even more so why they should be of a slightly lower standard.

A big improvement is the addition of a multiplayer mode that supports up the four players. Once you’ve won all the cups in a Mario Kart game, the thing that will keep you coming back is the chance to race against friends. Even if I do think that the levels are a little unexciting this time, I still get a lot of fun out of it when I’m playing with people I know. Not only can you race on any of the tracks, but, again, there’s also a battle mode. I’m not an enormous fan of battle mode, but the battling arenas are really good, there’s one which is a ring with lava in the centre, and one which is on the roof of a skyscraper which especially stuck with me, though all of them are fun. Weirdly, you lose all background music if you play with more than one other person, which is a shame because it has a nice soundtrack.

One aspect of the single player mode has seen quite an upgrade as well: the CPU players are no longer horrible cheaters. They don’t have infinite items (they have the exact same access to item boxes as you do), they can’t just jump over any items that will harm them, and they don’t work together against you. This brings the difficulty down to a much more comfortable level. New items are available as well: it’s now possible to get multiple shells or bananas at once, you can leave a fake item box as a trap, and there’s now a Spiny Shell which heads straight for the player in first place, hitting anyone along the way. The Spiny Shell has caused controversy amongst fans but, here at least, I don’t find it too intrusive. As before you can do time trails as well, but annoyingly it impossible to save your records on the Wii version.

I think this might be a case of taking one step forward, but two steps back. It’s all in good fun, but the original is very slightly better. Rating: 7.5/10