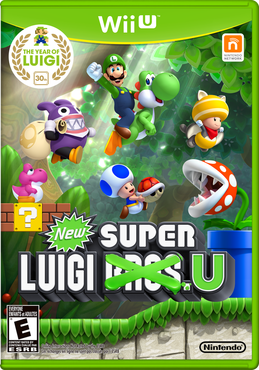 The most significant change to this game is the fact that it doesn’t feature Mario. The opening cutscene to this game is even the same as the one in New Super Mario Bros. U except without Mario. This allows Luigi, the Mario Bro I’ve always liked most, to take centre stage. This isn’t just a superficial change either; Luigi actually controls quite a lot differently to Mario, just as he did in certain older titles.

You might be concerned that the lack of Mario may also mean that the game lacks a four-player co-operative mode, but don’t worry! It doesn’t mean that. Nabbit the thief has been added as a playable character and he also has his own unique play style. Nabbit cannot be harmed by enemies, though he also can’t use power ups (he just steals them and doesn’t use them) meaning that one player will be able to use his special powers either for good or evil when playing with others. Sadly, the other two characters are still just a couple of Toads.

The levels also have their own interesting difference; they’re a bit shorter, but also much harder with much trickier designs and greatly reduced time limit. For some, I suppose, this could be seen as a negative thing, but I certainly don’t see it that way. I appreciated the greater level of difficulty and felt a much greater sense of achievement when completing a level.

In conclusion, it is a good improvement over New Super Mario Bros. U but it does still have many of its downsides. The New Super Mario Bros. aesthetic, for example, is something I find rather boring and the boss battles still aren’t great. But it’s certainly nice that there’s another Luigi-based game and I appreciate the things they did to make it different.