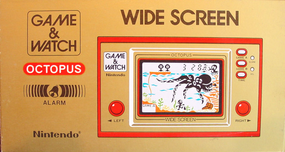 Octopus was one of the earlier Game & Watch titles and, as the years have gone by, the eponymous Octopus has become perhaps the most iconic thing from this early series of games. This also happens to be one of the better ones.

You have three lives, represented by the three Mr. Game & Watch people waiting in a boat at the top of the screen, and you have to go down into the water and collect as much treasure as possible from the sunken ship. However, this isn’t a simple undersea excavation! The treasure is guarded by a very defensive octopus (hence the title) and you have to be sure to avoid its tentacles because, if it catches you, you’re dead!

On your first try, it will probably seem very hard. It may even seem annoyingly hard, although slowly but surely you’ll get the hang of it. You’ll learn the movements of the octopus and figure out the best way to get the most treasure and to keep yourself as safe as possible! Having said that, due to the somewhat limited Game & Watch gameplay style, you’ll probably find yourself inadvertently moving right into a tentacles path because you almost expect the movements to be slightly smoother. It’s a little hard to explain, and it’s not something that happens that often, but is still bothersome when it happens.

Being a Game & Watch, it is a fairly simple game and other than two different difficulty levels, an alarm clock and the ability to save scores, there’s not all that much to it. But what there is to it, is nice. Worth a try, if you can find a way to play it.

Buy it as part of Game & Watch Gallery here.

(I do not own the copyright of the boxart.)