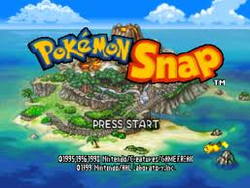 Pokémon Snap  is a very unique instalment in the Pokémon series and I certainly consider it the best of the non-RPG games. This game, unlike any other I can think of, is based around photography.

Every level goes like this: you find yourself in a small car thing (called the Zero-One) which drives along a set course. As the car drives along, you’ll see lots of Pokémon in their natural habitats (beaches, caves, volcanos etc.) and you have to take photographs of them. The idea is, that you get the nicest possible photos you can of them and, at the end, Professor Oak will score them based on certain criteria he has.

At first, you can only go to the beach and you don’t have many ways to interact with the environment around you, but the more of them you photograph, the more places you can go to and the more items you unlock. The items (such as apples and things called pester balls) allow you to do things that will reveal secrets in the levels. There are always reasons to go back to the old levels in order to try and find new hidden things.

The game does have its downsides though. It was made back when there were only 151 Pokémon and not even all of them are in it, so I feel it would really benefit from having a few more to find (a modern sequel or remake could solve this). Plus, I do think that there could be a few more levels, there are seven and one of them is very basic, so I think it would have been good to increase this number, especially since all of the ones that are in it are so nice.

On the whole though, while I do wish there was more to it, I still like it very much, I would give it an 8.9/10