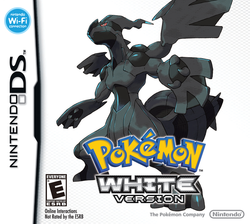 Pokémon Black Version and Pokémon White Version are the games that started out the fifth generation of Pokémon. As the series was often criticised for being too repetitive, changes were made to make these entries somewhat more distinct. Most significantly, until you have completed the game’s story, you won’t see any returning Pokémon, only new ones.

But, of course, many things are still the same. You are still a kid (boy or girl) who is leaving home to travel across the lands to become a Pokémon trainer. You have to battle eight gym leaders, battle the Elite Four and take down a criminal organisation. You still encounter Pokémon in the wild and can catch anything you see. All of it is still done in an RPG style. You gain the ability to travel to more and more areas of the map as your Pokémon learn new skills. As these are all things which help to make the series quite good, I am sure not many will be disappointed by their continued inclusion.

The fact that the world is entirely made up of new Pokémon was something that I enjoyed quite a lot. You never knew what you might see next, which kept things fresh and exciting. Having said that, there are quite a few Pokémon introduced in this game which are just inanimate objects with eyes; this felt a bit lazy. At the time I was particularly disappointed with one named Garbodor. Garbodor is literally a living pile of garbage. Initially I thought it was ridiculous and that it damaged the integrity of the series… but over time, I’ve kind of grown to love it for its sheer absurdity. Speaking of the Pokémon, they now have fully animated sprites during battles, which was a very nice touch which I enjoyed. The game’s story also touched on the morality of capturing Pokémon and using them for battles, which was interesting.

Another thing which especially pleased me about this game was its setting. Previous titles had been set in regions based on regions in Japan, but this time the region (Unova) was based off of New York. I loved this game’s world, especially how urban it was at times and what makes it especially nice is that this was the first time they tried to make proper use of 3D visuals. Admittedly, the 3D isn’t put to use that often and it is generally the isometric 2D style that you’re used to, but it’s nice when it comes up. I was honestly so excited to explore Unova and to find all of its secrets and, even after I beat the story, I had a lot of fun investigating all of the nooks and crannies. At times I was in huge cities, at other times I was in abandoned buildings or wilderness and I loved it all.

So, on the whole, there’s a lot to enjoy about this game and I got well over a hundred hours’ enjoyment out of it. Back in the past, it also used the Nintendo Wi-Fi system to offer online features; there was global trading, which was fun and exciting, and the ability to battle online, I loved all of that, but sadly they have all been discontinued. You can still do local battles and trades though, which of course, is nice. But the single player experience is already very solid, so you’ll still have loads of fun without the online play. Whether you know lots about the series, or merely want to give it a try, either of these games (which are essentially the same) are definitely worth playing.