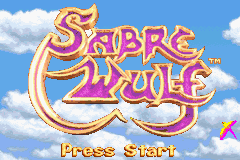 In this game you play as a nineteenth century style explorer named Sabreman as he wanders around the game’s world trying to undo the evil of villain Dr. Dolittle-Goode (fantastic name!) and the titular Sabre Wulf. There’s a combination of exploration in the 3D overworld and more linear 2D side scrolling levels that you find on the map.

The 3D sections are probably the better of the two types of play. It’s certainly not glorified map screen and it plays rather like an RPG. Every area in the game has numerous non-playable characters that you can talk to, many of which will present you with side-quests, which is quite nice as it adds to the game’s lifespan. There’re also shops you can visit where you can buy things to help you in the side scrolling levels, the most common purchase being various kinds of creatures, but I’ll talk about them in a minute.

In the 2D areas you have to walk through various tropical locations in order to get where Sabre Wulf is sleeping. Each time Sabre Wulf has stolen an item (which could be anything, from a priceless artefact to a living person) and so, when you reach him, Sabreman takes the item, Sabre Wulf wakes up and then there’s a hurried race back to the start. But it’s not quite as simple as that, Sabreman cannot make it through these stages by himself and so he needs help from the creatures I mentioned earlier. There could be, for example, a giant pile of rocks blocking your way and so you’d summon a bomb creature to blow them up, or there could be a tough looking monster in the way, so you’d summon a strong creature of your own who’d defeat it with a club. But you can only use each of the creatures a limited number of times, so you need to be strategic! There are quite a few of these creatures, and each of them has their own unique ability. I found it fun seeing all the different things they could do by using them in different situations and I certainly liked collecting them all.

On the whole, this was a very fun game and I think that it is often unfairly overlooked. You’re presented with a variety of exotic environments and the whole game has a rather magical feel to it. Rating: 9.1/10