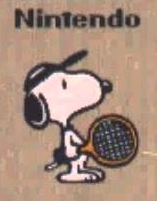 Snoopy Tennis is quite unusual in that it is one of the few Game & Watch titles which feature non-Nintendo characters. Instead, as you may have guessed, this game features characters from the popular Peanuts comic strip. Sadly, because of this, this is one game that will almost certainly not see a rerelease because of the copyright issues which would be involved, so, if you want to play this, you’re probably going to have to buy a (rare) original copy.

However, I don’t really see that there’s much reason to buy this game unless you’re a big Nintendo or Peanuts collector, because it just isn’t that good. You play as Snoopy and you have to return the balls hit towards you from Charlie Brown which can go towards one of three places where Snoopy can stand. When you return the balls, Charlie Brown never hits them back, but occasionally Lucy van Pelt will appear and return your shots. When Lucy hits the ball, it comes towards you much faster than when Charlie Brown hits it, so you have to be much faster about getting into place to hit it back and sometimes you’ll just be rallying the ball with her for a while.

That all sounds quite fun doesn’t it? Well, I’m sure it would be were it not for some big problems with the gameplay. Firstly, when you’re only returning the shots from Charlie Brown, they move incredibly slowly. Fairly often you’ll have a boring wait on your hands as the ball very slowly, and unrealistically, makes its way through the air towards you. I expect that makes the game sound very easy and it is when there’s only about one ball, but once Charlie Brown starts hitting several towards you and Lucy is hitting them back really fast, it gets far too difficult. The problem is that because of the limitations of a Game & Watch game, the balls move by freezing in one spot and then reappearing in another. Normally, while this may look a bit jerky, it’s not a problem, but because of this form of movement, I found it really hard to determine which ball was which after they ‘disappeared’ and since they’re all going at different speeds, it was difficult to know where to wait for the balls. There were also many times where multiple balls came towards Snoopy, but towards the different spots, so it seemed I had to miss one and therefore lose one of my three lives. What’s quite funny though, is every time you miss a ball, something breaks and it seems that Charlie Brown is going to be the one in trouble for it, so, you don’t get too annoyed at him.

On the whole, while the graphics are quite nice for a Game & Watch game, and it does double as a watch and alarm clock, there’s really not much point in getting this game (I’m sorry to say). It just doesn’t seem to work the way it should do.