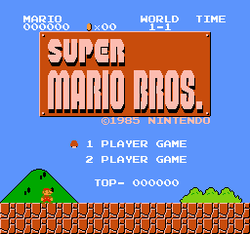 This is the first main game in the Mario series and the one which properly establishes most of the staples of the series. In fact, it was the first traditional side scrolling platformer game and something of a revolution in the world of video games.

The story of this game is the same as many other Mario games: Bowser has kidnapped Princess Peach and so Mario travels across the Mushroom Kingdom in order to reach Bowser’s castle and save her. You do this by going through various levels, filled with power-ups to collect and enemies to jump on. The game can either be done in single player mode, or you can do multiplayer mode where one person plays as Mario and does levels until he dies, and then the second player, as Luigi, does levels until he dies and it switches back to player one.

While the game is fun, it is very far from perfect. Occasionally, things seem a little off when you try and do a jump, which means you’ll sometimes find yourself dead due to slightly strange controls. Furthermore, there is no way of saving (unless you have the 3DS version with save states) and so you’ll have to win the whole game in a single sitting, and without dying too many times, which is bothersome.

Also, there’s quite a lack in level variation, which takes a bit of the fun out of it. You have five basic level types: regular plains levels, underground levels, high up ‘mountain’ levels, underwater levels and castle levels and once you’ve played one of each of these, you’re not going to find much more variety of environments. So, while the levels are all fun enough, none of them are particularly exciting (although one in particular, towards the end, is very hard!).

I realise that most of the problems I have with the game stem from the fact that it is quite old and that game developers were still learning, but at the same time, I have enjoyed similarly old games much more and so I don’t view this game very fondly. Having said that, this is by no means bad and is still worth playing.