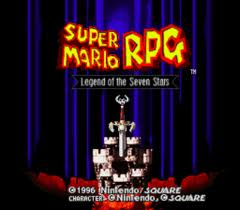 Super Mario RPG is the first RPG game to be released in the Mario series and quite frankly, I think it is also one of the best games in the entire franchise.

The story starts out like your average game, Bowser kidnaps Peach once again and Mario rushes to his castle in order to rescue her. One of the first things you do is have an RPG style battle against Bowser, but things take a strange turn when a giant sword falls out of the sky and does a lot of damage to Bowser’s castle and Star Road and separates all three characters. From then on, Mario must explore the world in order to find the fragments of Star Road and to find out what exactly this giant sword is. So this makes things a little more interesting than the typical “Bowser takes Peach, Mario must rescue her” plot.

Part of what gives this game a nice and unique feel is its characters. Mallow and Geno, two people who join you on your adventure, are very different to the Koopas, Goombas and Bob-ombs you see in every other game. It’s not just the main characters either, there are some brand new enemies too, aside from the main boss of the story (which I shan’t spoil) there are also things such as Octolots (which are kind of like Octoroks from The Legend of Zelda) and Frogogs (giant upright frog men). The fact that these creatures never returned in later games really adds to their appearance here, I think.

I think that the world of this game may actually be the best that any Mario game has. During your adventure, you get to explore vast forests, sunken ships, volcanos, cities in the sky and other equally exciting places, and while these are all things which have appeared in the series before, they just seem so much better in this game. Part of what make this game’s world so much more fun to explore may well be the fact that the graphics in this game are really rather handsome and look a little similar to the style of the Donkey Kong Country games.

I’d also like to mention that this game has loads of little references to other video games. Link (from The Legend of Zelda series) and Samus (from the Metroid series) both have small cameos in this game, and there are less obvious references to several of Nintendo’s other popular series throughout. Plus, since this game was made by Square, rather than Nintendo, you even get little Final Fantasy references snuck in here and there, which all adds to the games overall enjoyment.

Buy it here (American version only).