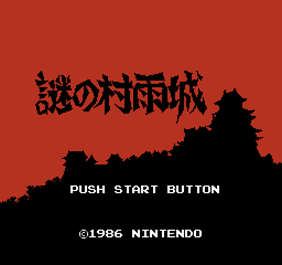 The Mysterious Murasame Castle is one of the early Nintendo games from the 1980s. Interestingly though, unlike virtually every other game they made at that time, this game was pretty much completely forgotten for the next twenty years. In fact, other than a few recent cameos and references, it’s still very obscure.

So, I guess you’re thinking “Since it was mostly forgotten about, it must be pretty bad” right? Well, if so, you’d be wrong. It may not be best game of that era (or, indeed, any era) but it’s still nice and fun and an interesting slice of Nintendo history.

What’s the story line? Take a guess. You play as Takamaru who must travel to four castles in order to defeat evils villains and rescue princesses. Nothing exciting, but then again it was the standard of the time. Also it does have a historical setting (17th century Japan) rather than just using a fantasy world, which is quite nice.

The game plays in the pseudo 3D top-down style that a lot of RPGs use and each level goes something like this; first you have to explore fields and forests in order to find a castle (the end of the level being signified by a group of tanuki) and then you have to make your way through a castle in order to find a boss and kill it. This is how it works for each of the four castles. It sounds nice and straight forward, but there are so many enemies!

Ninjas jump out from all angles and throw shurikens, bombs and fire balls all over the place and you have to be really skilled in order to maneuver your way around them because if you get hit three times, you’re dead. You, meanwhile, have a sword and some shurikens of your own (though you can upgrade weapons); the sword is very powerful and will kill pretty much anything in one hit, but you can only use it short range, and the shurikens are weaker, but much more useful.

The downside, beside the high level of difficulty, is that the game’s environments can sometimes seem a bit bland and there’s also not much variation with the soundtrack either (it’s essentially the same song all the time). The final level, however, is a refreshing change and quite spooky and sinister (the final boss is great too), but around the time of the penultimate stage, things may seem a bit boring.

So, this is a game which I think Nintendo fans (or fans of retro gaming in general) might enjoy but it’s appeal might not stretch to more casual players. I don’t mean to sound too negative; I’m certainly pleased I played it and the game is not without its charms, but it does feel a little dated.