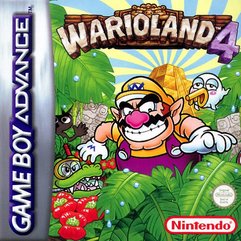 The fourth game in the Wario Land series is a pleasant step up in quality after a temporary dip with the third game. The tone of the series has changed quite significantly with this game, and that may be in no small part due to the fact that it was on the Game Boy Advance.

The game begins with Wario driving off in his fancy new car because he has read in the newspaper that there is treasure to be found in an ancient temple. He gets to the temple and inside there are several portals, these portals take him to various different worlds and these worlds are the game’s levels. You have to go through each one and find certain treasures in order to be able to move on to the next. You are, however, given a lot of freedom in regards to the order you do the levels in.

Something I appreciated was that all of the levels were very distinct. While they all had the same 2D side-scrolling gameplay, it was implemented in a variety of ways. Some levels were traditional cases of ‘go through the level and avoid the enemies’ and other levels were much more puzzle oriented and required you to think about it. As with previous games, there were times where enemies hurt Wario in comical ways and change him physically, which then means he can get past an obstacle. They all had very unique designs too; one level was a deep jungle in the middle of a monsoon rainstorm, another was a creepy abandoned hotel and some were more bizarre, surreal locations, like a pinball world and a domino world. Each and every one of them is full of secrets too.

I mentioned above that there is a significant change in tone with this game and this is something which is hard to clearly convey using words alone. One clear and good example is the fact that Wario is now voiced (and given much more expressive animations) which means you get a greater sense of his character. Meanwhile, all of the games bosses are monstrously hideous, which I find quite funny, but at the same time I do wonder if they might have gone too far with certain boss and enemy designs.

Beyond the main game, you get a selection of bonuses too. There is a ‘Sound Test’ mode which might sound pretty basic, but it’s actually really weird and boarders on avant-garde. There are also three mini-games, my favourite of which is a game where Wario is running along on a ball through a desert and has to jump over everything that gets in his way; it may sound simple but it is very addictive.

On the whole, it was nice to have another great Wario Land game, but I feel like it fails to reach the heights of the first two. The others felt like an adventure, this just felt like a greedy man snooping around looking for gems. Nonetheless, it is very fun and a game I would suggest to you, if you are able to buy it. It’s a solid little title.