Here are two things that I don’t like very much – eating tomatoes and wasting food.  As you can imagine, these two interests sometimes clash. This usually happens when I am eating a burger and a tomato has been put inside the bun. In order for it not to taint the rest of the food and in order not to waste it, I usually remove it and eat it as the first part of the meal.

Somehow or another, I ended up talking about this very subject with a friend of mine. She said that the look of distress on my face while eating a tomato was something which was very sad to see, which then made me feel quite guilty. I had never considered that it might be unpleasant for other people to witness, so I agreed not to do it in front of them anymore. I had taken a small step towards learning a lesson.

That very same day, I mentioned all of that to another friend of mine. She then crafted an elaborate story about tomato people (or, perhaps that should be, Tomato People.) She told me that all through their lives, they aim to make humans feel happy – their vines wriggle around in anticipation of making people happy. If they ever know that they’ve caused someone discomfort, it causes them enormous shame which can never be rectified. I know it was just a random story, but, oh my, that was not something I’d be able to forget. I had taken another small step towards learning a lesson.

The next day I was having dinner with the friend who had told me about the Tomato People (or Toms, as they like to be called.) By coincidence, she happened to have some food which she wasn’t too fond of me. Perhaps you can see where this is going.

“What are you doing?” I asked, she picked up a piece of the food.

“Oh, well, I’d hate to waste it,” she said and then took a bite which she clearly did not like.

“No,” I said, “Don’t eat it. No need to cause yourself unhappiness.”

“But how is it different to you eating tomatoes?” she asked.

“It’s a completely different situation,” I said, knowing that it was an identical situation.

And she ate and she ate as I argued that she should stop and every argument that I raised, really, was an argument I should raise with myself when I have a tomato. Eventually, she had finished eating and I had no more small steps to take towards learning a lesson, because the lesson had been learned.

So here’s a picture of me with my new friend who I won’t be eating. 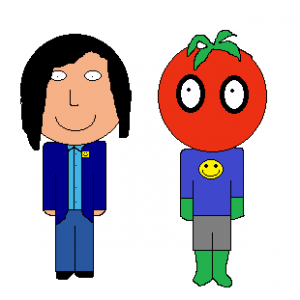 This entry was posted in Anecdotes. Bookmark the permalink.