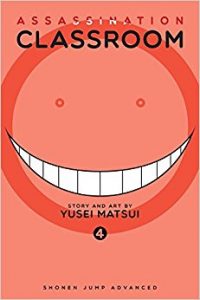 Having loved the first three volumes, there was no doubt that I would buy volume 4 of Assassination Classroom. This review may well contain spoilers for all of the volumes up until this point, so make sure you’re up to date before reading. Here is a link to my review of volume 3, if you need it.

In this volume we’re introduced to two interesting new characters: Mr. Lovro and Etona. Mr. Lovro is the mentor of Ms. Jelavitch and I quite like seeing his response to the Koro-sensei situation as well as his relationship with Ms. Jelavitch. Etona is even more interesting in that he is supposedly the brother of Koro-sensei and he also wants him dead (like everybody else.) As Etona isn’t also a giant smiley face octopus monster and is in fact, a (mostly) regular kid, it brings up more questions about who Koro-sensei is. Being drip fed these pieces of information about his past helps to further strengthen the mystique around him.

Other than Etona, I felt like this volume was a little lacking in more dramatic events.  There’s a chapter near the end which is about the students getting involved in a baseball game. While I can still enjoy reading it, I found it to be one of the least interesting chapters so far. But, on the other hand, the series doesn’t need drama to be endearing – there’s quite a nice chapter where Koro-sensei, Nagisa and Karma travel to Hawaii in order to watch a movie and I quite enjoy getting the chance to these characters doing something relatively normal. It helps everything feel more real.

Towards the start of the volume, Ms. Jelavitch needs to prove herself in order to remain a part of the school. I liked that she took the focus for a little bit and it gave her some nice development. I especially enjoy interactions between her and Karasuma. Meanwhile Koro-sensei is as charming as ever and it becomes even harder to believe that he would genuinely blow of the earth… yet the threat looms.

Personally, I felt like the story lost just a little bit of momentum with this instalment, but that by no means means that it was bad. I think you’d struggle to find any ongoing manga series where the quality remained consistently high with every volume. Overall I enjoyed it and would recommend it to anybody who has enjoyed the story so far.