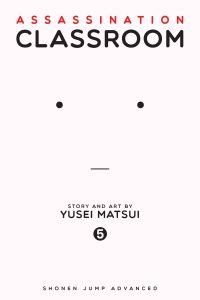 After feeling that Volume 4 had seen a little bit of a drop in quality for the ongoing Assassination Classroom story, I was delighted to see another upward incline with Volume 5. In fact, this might just be my favourite instalment thus far.

I’ll admit, the first two chapters aren’t all that exciting, because they just continued the baseball storyline from the end of Volume 4, but once that’s out of the way, I felt like every chapter was very enjoyable. One chapter has the characters making fake tattoos for an art class, which isn’t a particularly exciting situation, but I loved it all the same because it was nice to see everyone relaxing and having fun (particularly Koro-sensei, of course.)

The main “event” of this volume concerns the hiring of a new PE teacher to aid Mr. Karasuma with his teaching duties. The character was a very interesting one and, as I so often say, I wouldn’t want to spoil anything, but through him we get some very disturbing situations. This little storyline also gives us a chance to better know Mr. Karasuma and, of course, he just ends up coming across as even more likeable.

Something I found especially interesting about this volume, is that it felt like the “evil” aspect of Koro-sensei is starting to be downplayed. Yes, they do acknowledge that there’s a chance that the world is going to be destroyed and everyone is still planning to assassinate him, but there are a lot more scenes of him being a very lovable, caring and protective character. In fact, I’m pretty sure that he never makes reference to the fact that he’s going to destroy the world, it’s only mentioned by others, which has a significant impact on the way that he  comes across.

I think it’s safe to say that, by this volume, I am addicted. Every past volume, I’ve read slowly over a week or two, but I read this one in (almost) one go. I read the first two chapters, the baseball ones, stopped, then read all the rest and I just couldn’t stop. I’m really drawn into the world of Assassination Classroom and ensnared by the charms of Koro-sensei himself. If you’ve liked Volumes 1-4, look forward to Volume 5.