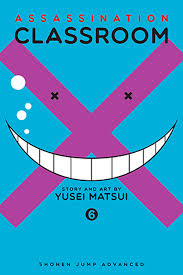 Following Volume 5, the pace doesn’t slow down in the sixth volume of Assassination Classroom! We get a chance to look into the backstory of one of the characters, new characters are introduced, other characters return and it’s all topped off with Koro-sensei’s endless charm.

The main event in this volume is based around Class E planning to go swimming. They’ve noticed that Koro-sensei seems to be weakened when he gets wet, so the pool could create the perfect stage upon which to assassinate him. Let’s just say, that their swimming takes quite a dramatic turn.

A thought occurred to me during this volume. Koro-sensei is so nice and protective about Class E, that the idea of killing him must be very hard for them. I mentioned in my review of the previous volume, that the ‘evil’ side of his character seems to be getting toned down and this was especially true this time. I don’t think he once mentions that he’s going to destroy the Earth, but he does do several caring and heroic things. Not only is the thought of his death likely to be hard for the students, but it also started to become hard for me, the reader.

To two students, Kataoka and Terasaka both get to spend a little more time in the spotlight and receive a good amount of character development. I like both more following this volume and I appreciate that Yusei Matsui is taking the time to flesh out each and every student – originally, it was just a class full of generic teenagers, but slowly we’re getting to know them all.

Overall, I’m still having a great time with it and am eager for the next volume! One last thing: I’m always careful about spoilers, but I will just say that Itona turns up again in this volume, so look forward to that.