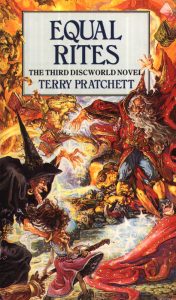 Equal Rites is the third novel set on the Discworld and it’s very different to the first two: while they both followed the adventures of Rincewind and Twoflower, this takes an entirely different approach and focuses on two new characters named Eskarina Smith (or, Esk) and Granny Weatherwax who live in a small village called Bad Ass.

As you may or may not have noticed, the title “Equal Rites” is a clever play on “Equal Rights” and the whole story is based on the fact that fantasy settings have an unfortunate habit of being very male-dominated. In the Discworld universe, the eighth son of an eighth son is destined to become a wizard, but for the first time in history, it seems that the eighth child of that eighth son is a girl and that girl is Esk. A wizard leaves his staff for her as he dies on the day of her birth, but nobody believes that a woman can become a wizard, so she doesn’t have an easy time of it.

You might be worried that a “progressive” novel written in 1987 might not be all that progressive by modern standards, but, actually, I didn’t really pick up on anything hugely objectionable about it at all, which was nice. The fact that the two main characters are female is quite a refreshing change for a fantasy piece and I feel that both of them are well written and developed without becoming stereotypes in any regard.

Something which was quite interesting to me, was that this novel felt a lot more sincere then the previous two, particularly the first. While it has a healthy dose of comedic scenes and the usual strangeness of Discworld, the storyline is something which is taken entirely seriously. The only potential downside is that I kind of struggled to figure out what was going on towards the end; it’s intentionally very confusing and contains hints of quantum mechanics – I can see that this might be unappealing to some, but if I read that about a book I wasn’t sure about, I’d certainly see it as a positive!

I think, perhaps, I like the second Discworld novel just a little more, because I liked the apocalyptic tone, but it was only marginally better and this makes for a fantastic read. Well worth a read, even if you haven’t read the first two (it’s very standalone) because it’s a lovely piece of feminist fantasy.