One Year by Mary McDonough 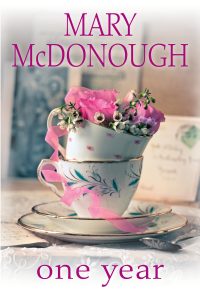 ary McDonough is best known for her role as Erin Walton in The Waltons, which just happens to be one of my favourite TV shows. I was very fortunate, in that I was able to attend a book signing and meet her (along with Michael Learned) but this is a review of the book and you can read about that experience in my previous blog post.

So, what is this book about? Well, it focuses on three generations of women within the large Fitzgibbon family, who live in a small town called Oliver’s Well. The story mostly centres around Alexis who has just married PJ (one of the younger Fitzgibbons.) She struggles to adapt to life as part of a large family and we get to see how it effects her and her relationship with her husband.

I don’t want to spoil the storyline, but essentially there’s conflict between certain members of the family. What I was extremely impressed by, was the fact that the book doesn’t tell you who’s right and who’s wrong and instead leaves you to decide for yourself. I found this to be very true to life. A lot of stories have an obvious bad guy when it comes to conflict, and that’s fine, but the way that it’s handled in One Year feels very much like you’re reading something which could be true. Some of the arguments were downright uncomfortable, because they were so real.

A particularly interesting character is Mary Bernadette Fitzgibbon (PJ’s grandmother) who is in her 80s, a devout Catholic and very strict. At times, you’ll think that she’s just a very nasty and self-righteous person – but other times, you’ll find that she’s actually a lot more sympathetic than that. She, like every other character in the book, is very fleshed out and three dimensional.

I was also very fond of Megan, who’s PJ’s mother. You know how sometimes there are characters in books who are just really nice and really likeable? Well, that was Megan in this book. Her interactions with Mary Bernadette, a woman who’s very different to her, were some of my favourites aspects of the book.

Something I was particularly fond of, was the book’s focus on the women in the family. Usually these kinds of stories will have a strong focus on the sons, fathers and grandfathers and how they bring the family together during hard times. In this book, the focus is on the women (not that the men don’t play significant roles) and it was nice to have such a strong, female perspective.

One thing I’d like to add, is that I especially enjoyed reading it as a fan of The Waltons. There are no overt connections to the show and it definitely has its own identity, but it has a similar sort of tone and there were a few moments and characters who strongly reminded me of certain Waltons elements. Fans should definitely give the book a read.

I suppose the only real negative thing I can say, is that it takes a little while to get to grips with who everybody is. There are a lot of characters and it can be a bit hard to keep track of at first. One chapter was basically just introducing a long list of people and I’d say that it was kind of boring. However, once everybody has been established, the book becomes quite addictive. It’s like a box of chocolates, where you decide to have just one more and then have about five “one mores” and you can’t stop.