Pride and Prejudice by Jane Austen 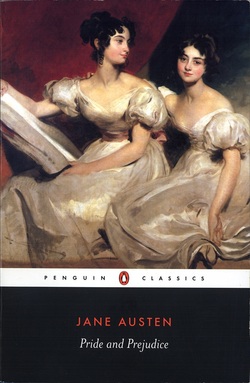 Pride and Prejudice, you may be a little disappointed to hear, doesn’t really deal with the prejudices of its time (as I thought it might, before starting it). However, this doesn’t change the fact it’s a very enjoyable book.

Curiously, the tone changes considerably as it goes along. Near the start, it reads almost as a satire of early nineteenth century upper-class life. Everyone’s obsessed with balls and getting rich husbands and so on. There’s a lot of very dry wit and humour and it made me laugh out loud several times. This slowly changes as the novel progresses and it becomes a regular drama/romance by the end, which is a bit of a shame. The latter half of the novel is still a good read, there are even still funny moments (though not as often), it all just becomes a little more generic.

A rather appealing feature of Pride and Prejudice is its memorable cast of characters. Elizabeth Bennet is the main character and a lot of the time she plays the role of the cynical sensible one who realises just how silly their lives can be. Elizabeth likely gets this trait from her father, Mr. Bennet, who barely does anything but make hilarious sarcastic comments about things. Mrs. Bennet, meanwhile, in stark contrast to her husband, is an extremely melodramatic character and she’s really quite ridiculous, but that makes her quite funny. There’s also Jane Bennet, and she’s just so nice that I like her so much. I suppose I’m a sucker for really nice people. Then there’s Mr. Darcy, and I never could quite decide how I felt about him…

I’m sure a lot of people may look at this book and think of it as a run of the mill ‘period drama’ (even though it was set in the modern day when it was written), but it’s actually a lovely piece with its own special charm. The odd bit feels a bit lazy, saying something like “then he gave the most wonderful apology that won everybody over again” when I’d much rather read what was actually said. Some scenes also feel a little too drawn out and can get boring. But despite its flaws, I’d still recommend this book.