The Fellowship of the Ring by J. R. R. Tolkien 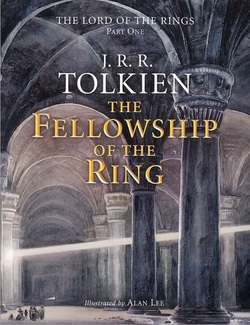 This book is the first in the Lord of the Rings trilogy and is also a kind of sequel to Tolkien’s other novel, The Hobbit, which features several of the same characters. While it wouldn’t be necessary to have read The Hobbit in order to understand this book, it would certainly enhance the experience and I would recommend it.

The story starts with Bilbo Baggins planning the celebrations for his one hundred and eleventh birthday. Bilbo now has an heir who lives with him who is named Frodo. Frodo is, it could be said, the main character to this novel. Bilbo pulls off a big stunt at his party so that he can vanish and Frodo inherits all of his stuff, including the ring he stole from Gollum in The Hobbit. Gandalf comes and has a chat with Frodo and tells him that he must begin a long quest in order to have that ring destroyed, because if he does not, some very bad things indeed will happen.

This book has some really excellent characters who you’ll love reading about. First, there’s Gandalf (who also appears in The Hobbit) a wizard who’s very wise, but also quite playful. You always get the impression that Gandalf knows a lot more than he says he does. Then there’s also Strider, a mysterious man who joins the heroes later on in the novel, I like Strider because he’s a very practical, no nonsense kind of hero. He’s just downright cool, really. But, I think the most loveable character in this book is Samwise Gamgee, the slightly bumbling, but utterly devoted and loyal servant of Frodo. Almost everything he does is adorable. There are other wonderful characters too, such as Tom Bombadil, the strange wizard who lives in the woods, but, I’ll stop myself there.

But the best thing about this novel isn’t the story, nor its excellent cast of characters. Very rarely, I would say the best thing about this novel is its setting. This book is so fantastically immersive! It’s just amazing to pick up this book for a while and to escape to Middle Earth for an hour or so. Tolkien is really good at describing nature and there are times where the characters just walk through the woods for a bit, but it’s STILL really, really good to read. There’re also some pretty good links to The Hobbit which show that it is clearly set in the same world, but that a lot of time has passed, and I like that a lot.