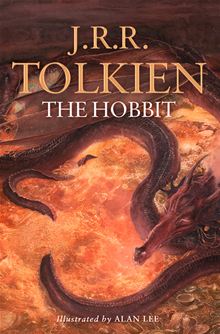 This is J. R. R. Tolkien’s first published novel to be set in the vast fantastical world of Middle Earth. The story follows the adventures of a hobbit named Bilbo Baggins who one day finds himself involved in a quest to defeat an evil dragon named Smaug, all thanks to a wizard named Gandalf.

While the story maybe a rather simple one of ‘hero has evil to vanquish, comes across obstacles on the way’ that doesn’t stop this from being a highly enjoyable book. The majority of things that Bilbo comes across are really interesting to read about and most certainly create some very strong images. When reading this you’ll find such cool things as: a forest so thick it’s almost as dark as night (and is also crawling with enormous spiders!), a race of giant eagles who live at the peaks of mountains and can talk, an enormous network of caves filled with goblins… I could go on.

Plus, while the world very impressive; there are some really wonderful characters in this novel too. First, you have Gandalf the wizard, a playful and mysterious person who aids the hobbit and his companions on their journey. It seems almost as if Gandalf is pulling all the strings from behind the scenes, making people do things without them evening knowing… or perhaps he is merely helping destiny along its way. Regardless, Gandalf is a character who improves every scene he’s in. The same applies to Gollum, a character who Bilbo stumbles upon in the caves. The character seems to be totally amoral, having lived almost the entirety of his life isolated from others, yet you still feel some kind of sympathy for him, almost as if you pity him. Almost as if you wish you could help.

The whole thing is a wonderful ‘escape from reality’ (if one is really needed) and gives you a big adventure that takes place in an amazing world. The only problem with it seems to me, that it feels like an excellent story sandwiched between a slightly long opening and an overly long ending. It takes a little while to get started, then, once you think the story’s finished, it goes on for another thirty pages or so!

But, still, it’s fun and exciting fantasy novel, and definitely worth reading: 8.7/10