The League of Extraordinary Gentlemen, Volume I by Alan Moore 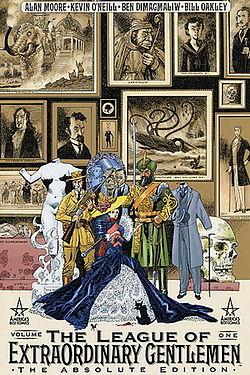 This graphic novel is set in a steampunk alternate history in which numerous fictional characters coexist and have adventures together. That alone is a good reason to buy the first volume of The League of Extraordinary Gentlemen, but there are more reasons too. Having said that, if you are not familiar with any characters from 19th century literature (there are characters from other periods too in the later volumes, but this one mainly features characters from the 19th century) then you may not enjoy this story quite as much. A basic knowledge of the storyline of Dracula, The Invisible Man, Jekyll and Hyde, and the Sherlock Holmes stories are the main things you should have before reading this.

Anywho, the general storyline is okay: a general mystery really and you can try and figure it out as you go alone. Throughout the comic too, are hidden little references to other novels and works, which is a nice touch. Kevin O’Neill is the illustrator of this graphic novel, and his art style is really very good. O’Neill creates some really nice Victorian scenery some times, and at other times he creates some amazingly eerie and creepy scenes. On the downside though, there are some scenes which are needlessly sexually explicit, which is somewhat annoying. Once the excitement of all these characters being together wares off, you may begin to get a little bored of the story because I think it is slightly bland.

Nonetheless, regardless of any downsides, this is a good start to the series: 7/10