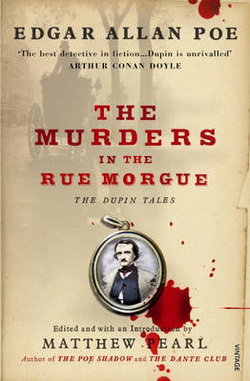 Edgar Allan Poe created a character named C. Auguste Dupin. Dupin is often called the first detective and is certainly an interesting and original character. All of the stories in this collection are about Dupin and an unnamed friend of his (the narrator), and the crimes they investigate in Paris. Poe wrote three Dupin stories and all of them are collected in this book.

The Murders in the Rue Morgue, rating: 8.5/10
This is the story which introduces us to C. Auguste Dupin. It starts with a section on analysing, then goes on to explain how is was that the narrator came to meet Dupin before we find out about the actual murder. People who like to be able to solve the murders through clues in the story might be disappointed with this, as it must be almost impossible to determine the solution based only on what you’re told. There are funny moments in the story, but there are also horrific moments and, at one point, it’s downright surreal. All this adds up to make this a great story.

The Mystery of Marie Rogêt, rating: 7.5/10
This story seems to be a lot more serious than the first, which is probably due to the fact that it involves Dupin investigating a real life murder (kind of.) Aside from a few humorous moments where Dupin is very critical of false theories about the murder, this whole story is a lot darker than the first. I did enjoy the shift of tone, but what was slightly tedious was the fact that the entire story is basically one long monologue by Dupin, I felt the characters could have actually done a little more. This was a generally interesting and enjoyable story though.

The Purloined Letter, rating: 7/10
After how grim the last story seemed, there’s a big change in tone with this light-hearted tale. Here Dupin is given the task of finding a letter which has been stolen, which he does very quickly and cleverly. Still a good story, but my least favourite of the three. This one just seemed to lack the substance of the other two.

(Originally there an a post called “Video Call” here, but it had to be taken down and, as such, I have replaced it with a review!)