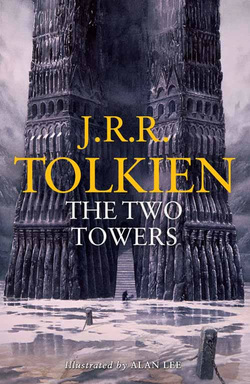 Things pick up exactly where they left off last time with Frodo and Sam having separated from the rest of the group in their mission to destroy the ring. Though, oddly enough, things aren’t written linearly. For the first half of the book, you’re given no word of Sam and Frodo, and instead find out about what Aragorn and everybody else did next. I can’t quite understand why this was done; although it does build a fair bit of tension for Frodo’s cliff-hanger which I suppose could be the reason. You’re also treated to quite a shock very early on, which is good, but I shan’t spoil it…

As with other Tolkien novels, there are many interesting and likeable characters to be found in this book. One character I particularly liked was somebody called Treebeard. Treebeard is a type of sentient tree called an Ent, which I thought was a very nice idea. Plus several orc characters are introduced who are very effective villains, being both comical and menacing. We’re also treated to the return of two lovely characters from his previous works, including one particular favourite of mine from The Hobbit, which I was very happy about.

Sadly though, while this book certainly is good, it doesn’t quite reach the incredible levels that the previous one did. Part of the reason for this book falling a little short is the fact that there are several battle scenes. I did not find the battles at all fun to read. Often, when going to read a bit more, I dreaded having to read through another boring segment on fighting. Another thing is, that while the first book (and The Hobbit too) were big, bright exciting fantasy stories, here things begin to get quite bleak which took a lot of the fun out of it for me. That said, this is still a good novel and, if you’ve read the first, you should definitely read this.