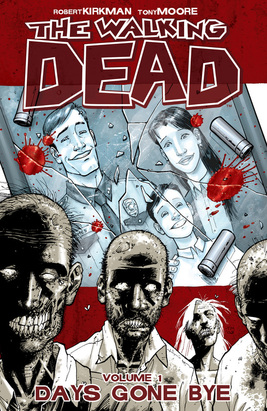 The Walking Dead is (currently) an ongoing comic book series which follows the life of a man named Rick Grimes as he finds himself in the world of a zombie apocalypse. And when I say ‘finds himself’ I mean it quite literally; he wakes up from a coma and when he does so, the world he knew is gone.

It’s actually quite difficult for me to talk about the plot, because a lot of the things that happen are what I would consider spoilers to share and therefore things I’d not like to include in a review, but perhaps that says something about the quality of the storyline: there are lots of unexpected and exciting twists and turns which keeps things moving along quite nicely. However, there is a slight downside to this in that it does very occasionally feel like things have been rushed.

Character-wise, in this first volume you don’t really get a huge look at anyone beside Rick himself (although other characters are introduced) and I have to say that I like Rick. He’s a normal person and his reactions to this nightmarish world are relatable, he’s our gateway character. I guess certain aspects of his pre-apocalypse life are a little too generic, but this isn’t a huge problem.

The artwork by Tony Moore is also quite nice. I don’t like to talk too much about illustrations as I feel a story can stand on its words alone, but the art does a good job of conveying the hopelessness of the world. I also like that a fairly light and cartoony style is contrasted with a very dark story.

I know zombies have a reputation of being ‘silly’ (a reputation which I don’t think is fair) and I certainly don’t think that this fits that reputation at all. Kirkman explains in the introduction that he wants to use the zombie idea in order to explore human nature and morality, and I think it’s the perfect canvas on which to do so! The story is definitely off to a good start.