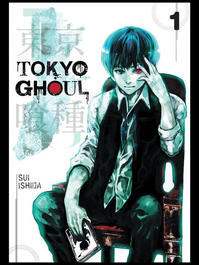 Tokyo Ghoul is a manga set in a world much like our own, but with one crucial difference! In Tokyo Ghoul there is a race of intelligent creatures known as ghouls and the only thing that ghouls are able to eat in order to sustain themselves is human flesh! Perhaps I’ve just made it sound a bit melodramatic, but it’s actually very good.

The story follows a boy named Ken Kaneki who, after certain events that I shan’t spoil, finds that he is half-ghoul. He then struggles to find his position in society; does he live with humans and grapple with the desire to eat their flesh, or does he live as an outcast with the ghouls? These are the questions he must find the answer to.

What I like about Tokyo Ghoul is its very urban setting. As you might be able to guess, it is set in Tokyo and I think that the artwork really nicely conveys the beauty of the city. In reality I love walking around cities in the middle of the night, there’s a certain mysterious charm to it, and the artwork of this story captures that feeling perfectly. It dovetails beautifully with the feeling of mystery and fear that surrounds the ghouls and their culture and society.

The tone of the piece is also quite interesting: near the start, you kind of get the impression that it will kind of be the typical, light-hearted teenage manga affair, but it quickly becomes much, much darker. I appreciated this quite a lot as the unexpected change of direction makes the darker aspects of the story much more impactful.

As it was only the start of the story, there was still a lot more that I wanted to know and characters I wanted to see developed further. Doubtlessly this is what I’ll get if I read the later volumes. This doesn’t so much tell a complete story, rather it sets the stage for one, and, if you ask me, it certainly does a good job of getting you excited for the next volume. The only real negative I can say about it is that I occasionally found some of the action sequences hard to follow.