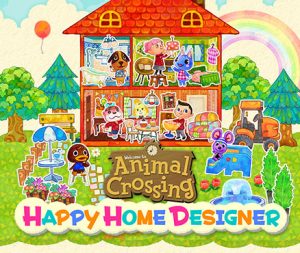 Designing homes has always been a big part of the Animal Crossing series. You catch bugs and fish, sell fruit, do chores for people and all to make some money to expand the size of your house and to get new pieces of furniture. With Happy Home Designer, they decided to make designing homes the central theme of the game, making it very different to previous titles.

At the start of the game, your villager gets a new job working for Nook’s Homes, a home design business run by Tom Nook. What’s quite nice this time, is that you are put in complete control of what your  character looks like right from the start: you can choose skin colour, hair colour, hair style, the shape of their face and what their eyes look like. It’s a nice feature which I am surprised wasn’t implemented earlier, so the game gets off to a good start.

You get shown around the Nook’s Homes office and are introduced to your colleagues. You work alongside Lottie (an otter, related to Lyle from previous games), Lyle (who’s slowly become a lot more legit as the series has gone on, which I like), Digby (Isabelle’s brother) and Tom Nook himself. All the characters can be spoken to in order to answer questions and tell you what to do.

Once that’s all done, you move onto the main body of the game: building homes for people. You go out onto the street and you speak to passing villagers who will tell you what they’re looking for in a home. They usually will give you some sort of instructions (but not always) and then you’re just given free reign to make the home as you please. You choose the best sort of location for the house (for example, in the woods, near the beach etc.) and then design the outside of the house and the garden, then you start placing furniture and designing the inside.

What’s quite nice about designing the homes, is that it gives you the opportunity to be quite creative. In past instalments, it was hard to make a really special home, because you needed to have a lot of money, but this time money doesn’t factor in at all. You have a large selection of furniture to select and each time you take on a new client, you unlock more pieces of furniture to unlock. It must have more furniture options than any previous game in the series.

As well as designing homes, Isabelle will occasionally come in and ask you to help with public buildings. For example, she might ask you to design a restaurant, a school, an office or a shopping centre. These tasks always took longer than designing homes, but I always enjoyed doing them more. After doing them, you can also see animals using them as they were supposed to be used, which I always quite liked and found quite satisfying.

To help make the designer aspect more user-friendly, furniture can now easily be placed using the touch screen. It makes moving and rearranging furniture so much easier and I hope that this is a feature we’ll see back in future games. You’re also given more freedom in regards to where furniture is placed. In the past, it used a kind of grid system, where furniture took up certain squares, but you can now place things, for example, so that they’re half in one square and half in another, if that makes sense.

But, speaking of easiness, the game is definitely too easy. The villagers may give you a rough outline of what sort of home they want, but if you can fail to satisfy them, it never happened to me.  At times, it started to feel a bit monotonous and I just started to think “What’s the point?” so I definitely recommend playing this in small doses. This applies more to the home designs, rather than Isabelle’s tasks. It’s sad that, for example, you can’t even build friendships with the villagers like you do in previous games. Or that you can’t save money to do things.

I guess I do quite like being able to design things, I just wish that more purpose was given to your creations. You can share them online, but that was never all that appealing to me. But if you don’t think that will bother you, the game has a lot of content: all of the hundreds of Animal Crossing Amiibo cards can be scanned and they’ll all bring in new villagers with new tasks and furniture. It’s just a shame that the Amiibo cards were distributed randomly in packets – I wasn’t actually able to find the cards of a lot of my favourite animals, such as Julian the unicorn.

Overall, I wouldn’t want to say that this was a bad game… It’s just very basic. It’s nice to dip into it every now and then when you’re bored, but it never really captivated me. I can imagine that there are some people who would get really, really into it and get hundreds of hours of fun out of it… but I don’t think that that will be the case for most people. The game is very similar to Animal Crossing: New Leaf in terms of interface, graphics and soundtrack and I couldn’t help but think that it should have just been DLC for that game, rather than an individual release.