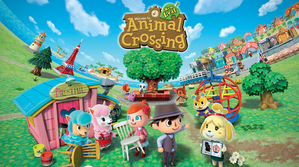 Like previous games, you start the game on a train heading to a new home, but this time things take a somewhat odd direction. Rather than just arriving in the town and buying a home, you arrive and are mistaken for the town’s new mayor; this is a mistake which is never corrected and you then live in the town as mayor. This gives you the ability to customise your town by having various things constructed. This level of customisation had not really been available in the previous titles.

There is quite a wide range of other new features too: you can now buy a wet suit and go swimming in the ocean where you can dive to catch more ocean species. You now can rent rooms in the museum in order to create your own exhibits. A Dream Suite allows you to visit the towns of a huge number of other players via the world of dreams. Your town now has a ‘Main Street’ area where you’ll find a variety of shops and is essentially an improved version of the last game’s city. Fortune cookies are available to purchase for play coins and give you access to lots of very cool Nintendo-related items. The tropical island from the first game returns, but it now has much more extensive features, including a set of mini games. There are several new special characters and events. The game also features a very handy achievement system (in the form of badges) and offers some StreetPass functionality in that you get to see the houses of any person you pass on the street in real life.

All of these exciting new features are on top of all of the things I already love about Animal Crossing: having loads to collect, being able to catch a variety of fish and bugs to fill an encyclopaedia, having the seasons change along with the seasons of reality and just the general pleasure of maintaining your town and chatting with the crazy villagers. I will admit, however, that New Leaf is lacking in one area: in Wild World I really liked it when characters like Tom Nook or Pelly would open up and tell me a little about their private lives, but they never do this in New Leaf and as a result, they generally seem much less interesting. However, this was a minor blemish in what was otherwise an extremely addictive and satisfying game.