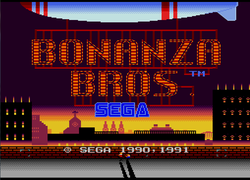 Bonanza Bros. is an old Sega game where you play as two brothers who break into high security buildings and steal highly valuable items as a test for the security systems (or, at least, that’s what they say). It’s a fairly simple premise, but is actually quite fun.

Every level is a different building and all of them are 2D (though you are able to step into the background to hide from guards). You have to steal every valuable item and then get to the roof so that you can escape in the most inconspicuous of getaway vehicles: the zeppelin. However, along the way, you’ll encounter various guards who will attack you in different ways; it’s best to try and sneak past all of them, because you only have a weak gun (which will stun them temporarily) to defend yourself with.

For me, the biggest appeal of Bonanza Bros. is its sense of humour; most of the sound effects are quite comical and I like how the game often seems extremely violent, even though nobody ever really gets hurt. I also find the designs of most of the characters pretty amusing too. It’s fun, it’s silly and I like it. Plus, as a nice bonus, it can all be played in co-op mode, making it even more fun.

Though, as much as I may like Bonanza Bros. I have to admit that it does have its failings. The characters move very slowly, which can be occasionally frustrating and I really wish it was easier to avoid shots fired by guards. I also thought that the music used throughout the game was pretty bad. Perhaps most annoying of all is the fact that the game is always ready to be played in multiplayer mode (player two need only press a button) but because of this it is literally always in splitscreen… I know this ties back to its origin in arcades, but could it not have been changed for console releases?

Overall though, while the game does have some flaws (mostly, perhaps, due to its age) it has enough charm to make it very enjoyable. Rating: 7/10