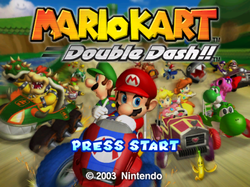 Mario Kart: Double Dash!! is the fourth game in the Mario Kart series and it might just be the most innovative of the lot! However, while Double Dash!! may bring a lot of new features and changes to the series, does that equate to a high level of quality?

First, let’s look at the character selection. All the characters from the previous games return apart from Donkey Kong Jr. and right from the start you also have Diddy Kong, Bowser Jr., Birdo, Waluigi, Baby Mario, Baby Luigi, Daisy and Paratroopa. Also, for the first time, there are unlockable characters! Getting new characters gives a good motivation for getting all the cups. Strangely though, one of the unlockable characters is Toad; I tell you that now so that you’ll avoid disappointment when you get him. The others are good though!

I always love the selection of characters in Mario Kart games, but this time it actually has a strategic impact on the races; characters have their own unique items (which they can obtain through item boxes) and you also get two characters per kart! It’s fun choosing two different characters and it means you can mix and match people based on the items you want. Plus, on top of all that, you now have a selection of different karts which you can ride, and there are more to unlock too. This adds some welcome variation to the formula.

For the first time, all of the characters who appear have full 3D models and all of the levels are full 3D as well. This is a first for the series and in terms of graphics, the Gamecube helps the series to take a strong step forward. Seeing the characters reacting to what’s happening in the race is actually quite entertaining.

This may all sound well and good, and for 50cc and 100cc it is, but if you play at 150cc this game is awful. Why? Because the CPU cheating becomes so grating; you’ll be constantly barraged with shells (and blue shells blow you up now!) and whether or not you win a race seems entirely down to luck. I know the first game had this too, but at least there the items weren’t so bad and you didn’t need to win the high up cups to unlock everything. What makes this even worse is the fact that there is an added All-Cup Tour where you have to play every single one of the game’s race tracks; with such a high level of luck involved, I really hated this. I found it stressful. More stressful than my real life driving exam. To make matters even worse, at 150cc the controls feel really, really bad and I never really felt in control.  It makes me anxious when Double Dash!! tracks return in later games because I am reminded of the chaos. I’m not even joking.

So on the whole, while Double Dash!! added some good things to the series, has the same top of the range multiplayer and at it’s core has a lot in common with the games I like, the 150cc cups left me with such a hugely negative impression that it soured my whole perception of the game. I’m really not sure that any other game has ever had such a bad effect on me.